In 1143 Lübeck was founded by Count Adolf II of Holstein as Low German city, and by appropriating the Slavonic name of Lubice –i.e. of the ruined predecesssor settlement destroyed in 1138 – it was sought to continue the emporia's legacy and its trade network. In 1158, the city was ceded to Duke Henry the Lion, who moved Saxon merchants from Bardowick to Lübeck, which inherited its salt trade route from Lüneburg. There are several indications that Lübeck lacked a fleet and therefore sought to attract foreign merchants and ships, as indicated by messenges sent out by Henry the Lion in 1159 to Denmark, Sweden, Norway and Russia, to offer them peace and access to free trade in his city of Lübeck. This effectively meant that the merchants were excempted from tolls, and from this favourable free trade arrangement the gilda communis could have evolved –a trade confederation between Gotlandic and Low German merchants. Two years later, in 1161, the Artlenburg Treaty was negotiated to insure peace between Gotlanders and Germans. The need for ships in Lübeck seem to have frequently surpassed the supply. Even as late as 1224, Slavonic ships needed to be hired for the transportation of herring.

Lübeck's fleet became also the city's achilles heel, as King Canute VI of Denmark threatened vital mercantile interests by arresting the Lübeckian fishing fleet off the Scanian fishing grounds and freed it on the condition that it accepted him as patron, de facto becoming part of his kingdom.The decision to offer the Danish king the sovereignty over the city in 1201 was certainly abetted by the disdain for Duke Adolf III of Holstein's rule, whose vicegerent's government was perceived as "tyrannis".

Lübeck seem to have greatly benefited from the pax waldemariana, as the following Danish regent - King Valdemar II - did not only confirm all municipal privileges granted previously by Emperor Frederik Barbarossa and Duke Henry the Lion, but Lübeck merchants were also able to expand their trade connections under Danish protection. The economic development of Lübeck was decisively stimulated by the king between 1203 and 1209, and its merchants received new privileges on the Scanian markets and the right to import and export goods without restrictions, thereby even gaining an advantage over native Danish merchants. The Danish rule in Lübeck, which lasted until the Battle of Bornhöved in 1227, has also left archaeological traces, as many construction and land-reclamation works in the harbour area and fortifications date from the Danish period, specifically brick-architecture, which was reasonably novel at that time and increasingly replaced wooden constructions. Of particular importance are of course the medieval ship-remains.

The medieval ship-remains were analysed and published by Dr. Detlev Ellmers, former director of the German Maritime Museum (Deutsches Schifffahrtsmuseum). The finds assemblage include sintels from the early 13th-century (and hooked nails (=double-bend) from the late 12th-century, as indicative of the bottom-based tradition and the Bremen-type, commonly associated with the historical ship-type “cog”. Also clinker-nails predating 1184 were found, which are – for earlier periods such as this – commonly associated with a Scandinavian origin.

Although the find maritime assemblage is meagre compared to the importance of Lübeck, the heterogeneity seems to reflect different maritime influence as indicated by historical sources, especially the efforts by Duke Henry the Lion to attract foreign ships.

Interestingly, the first town seal of Lübeck (ca. 1223) itself has been subject to a debate on whether it represents an early “cog” (often perceived as the phenotypical ship-type of the Hanseatic League), or rather a Scandinavian-style ship. 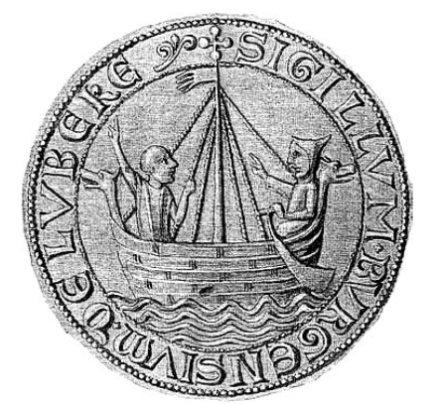