In 1628, three fleets sailed from Holland to the West Indies to cut of Spanish and Portuguese trade. A fleet of twelve ships under the direction of Simon van Uytgeest targeted Brazil to intercept ships there. 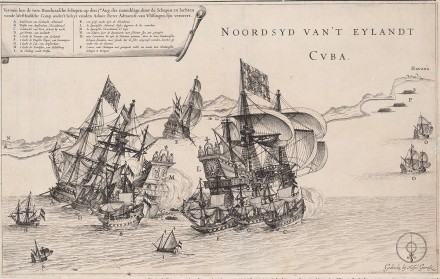 A second fleet of twelve ships led by Admiral Pieter Adriaanszoon Ita left for Cuba. It was Ita's assignment to capture ships from the Spanish silver fleet.The third fleet was to depart later that year and was commanded by Piet Hein.

On August 1, two large galleons, the St. Jago and the Nosa Senhora de Remedios, rounded  cape San Anton (west Cuba), and were spotted by Dutch scouts. The next morning the Spaniards tried to enter Havana with full sail. However, the bay was blocked by Ita. The galleons had to sail past Havana and were driven by the Dutch to the coast where they ran aground just east of Havana.

The Dutch tried to get closer with the intention to enter. During this attempt The Leeuwinne also stranded. The Leeuwinne was  heavily bombarded by the Spaniards. The rest of the Dutch ships were warned and kept at a distance. The fight lasted all day. Eventually the Dutch both overpowered the galleons. The Spanish crew gave up the fight, jumped overboard and reached the coast swimming.

According to De Laet, the losses on the Spanish side were large; more than half of the 300 crew members aboard the vice-admiral ship are said to have died in the face of about twelve dead on the Dutch side. The Spanish admiral ship could be towed away by Ita, but St. Jago was stuck and had to be left behind.

The Leeuwinne was probably towed away and repaired.