The Girona was a large Mediteranean build Galleass. The type was developed at Venice. The galleass was not quite suitable for the Atlantic conditions. The Girona was one of four galleasses that had sailed in Don Hugo de Moncada's Neapolitan Squadron.

The Armada's commander was Medina Sidonia. The fleet set out with 22 warships of the Spanish Royal Navy and 108 converted merchant vessels, with the intention of sailing through the English Channel to anchor off the coast of Flanders, where the Duke of Parma's army of tercios would stand really for an invasion of the south-east of England. The armada achieved its first goal and anchored outside Gravelines, at the coastal border area between France and the Spanish Netherlands.

While awaiting communications from Parma's army, it was driven from its anchorage by an english fire ship attack, and in the ensuing battle at Graveline the Spanish were forced to abandon their rendezvous with Parma's army. The armada managed to regroup and withdraw north, with the English fleet harrying it for some distance up the east coast of England.

A return voyage to Spain was plotted and the fleet sailed into the Atlantic past Ireland, But severe storms disrupted the fleet's course, and more then 24 vessels were wrecked on the north and western coast of Ireland, with the survivors having to seek refuge in Scotland. Of the fleet's initial complement, about 50 vessels failed to make it back to Spain. 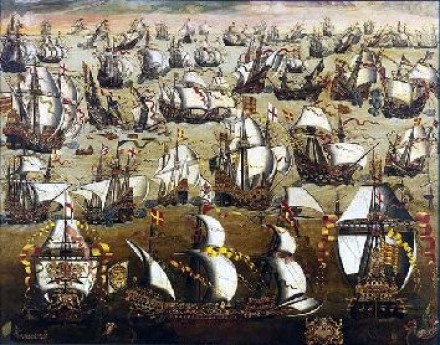 The first Armada shipwreck in Ireland identified and excavated in modern times was that of La Girona. In 1967, Belgium archaeologist Robert Stenuit began excavation on the site, and in the following  two seasons divers removed two brass cannon, shot for guns up to 50 pounds,  lead ingots carried for the production of  small-arms ammunition, navigational  instruments, and an abundance of  personal jewellery of gold and precious stones. 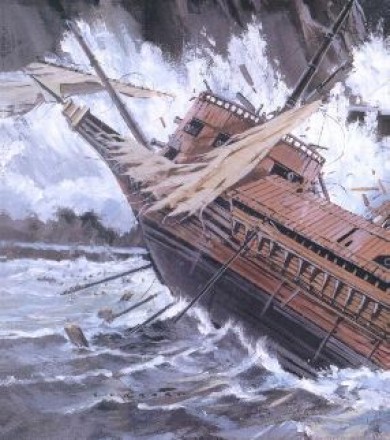 Artist impression of the sinking of the Girona.

The galleass is a cross type between the galley and the true man-of-war.
For propulsion it can relay on rowers and sail. A galleass had three masts of forecastle and aft castle and a gundeck with 50 guns over the rowers. 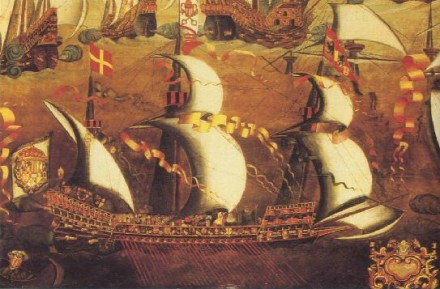 Galleas on a contempory painting. 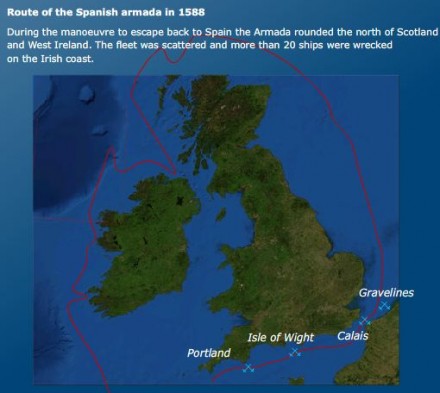