The Kollerup wreck or "Kollerup Cog" was discovered 1978 in a silted up area of Vigsø Bay at Kollerup Strand, some 125 km southwest of Cape Skagen as the crow flies. Although it was built of oak which was cut in southern Jutland (like the Skagen ship), some parts of the cargo indicate that it must have previously called at a North Sea port, probably in the Low Countries, as indicated by pottery from Schinveld and Blussum, as well as large quantities of slates from the Rhineland.

The timber was sourced on the Jutlandic Peninsular (Denmark) and was cut around 1150. The wreck has a number of features similar to the "Bremen Cog" (1380), which has been regarded as the paradigm example for a high medieval Hanseatic cog. For this reason the Kollerup wreck has been often described as "missing link" in the early development of cogs.

The Kollerup wreck is often associated with the Ummeland route, which was generally avoided: Cape Skagen was dreaded because of its mighty cross-seas and currents, which may also be reflected in the "Ummeland privilege", which implies a sea route along the Norwegian coast rather than the Danish Skagerrak coast in a later segment. Its finding location close to where the Sløjkanalen would have entered into the Skagerrak also points to a possible use of the Limfjord passage. It is easily imaginable that the ship's crew miscalculated the right approach to the canal's entrance and was driven ashore, or it has already silted up to unexpected levels and thus could not be traversed. Since it is not known exactly when the Limfjord's western access silted up, this has to remain a hypothesis (first formulated by this author, cf. Zwick 2017).

Many of its characteristics are in line with the Bremen-type, like the use of tangentially processed planks, the straight fore and after stem, the stern-rudder, the use of sintels and moss for caulking, as well as hooked nails. All these criteria have been brought in connection with the bottom-based tradition of which the Bremen-type was part of, which is commonly associated with the historical "cog" type.

Nonetheless, there is a significant number of criteria that is not covered by this typology, starting with the narrow hull, the unusually forward position of the mast–step in the first third, the mast's position in a floor-timber rather than a keelson, the special nails with which the plank shafts were fastened, i.e. featuring 4 pegs at the nail head's underside.

Another interesting anomaly is the reversed L-shaped strake at the transition between the lapstrake and carvel planking. It is the inverted L-shaped 5th strake, which is reminiscient of an old Norse feature known as meginhúfr, literally “strong strake”, which supports the upper end of the frame on which the knees rest. The meginhúfr traditionally facilitated the transition from bottom to side planking in Viking Age vessels, strengthening the vessel laterally and in some cases jutting out like a cornice at the waterline. 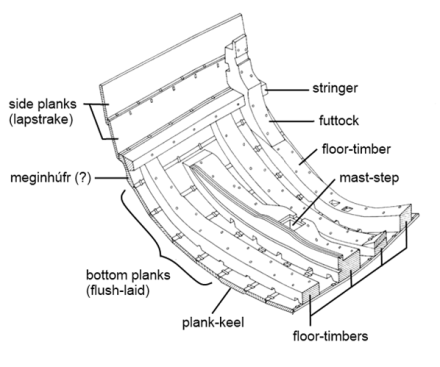 The wreck is curated by the Museet for Thy og Vester Hanherred.

As the wreck is seen as the archetype for an "early cog", a ship-type that has been commonly associated with the Hanseatic League, a (near) full-scale reconstruction was made by a film-set company for the first show-room of the European Hanse Museum in Lübeck, which shows the arrival of German merchants in cogs in 1191 at the lower reaches of the Neva River (Russia) to conclude a treaty for the establishment of a trade embassy in Novgorod, which is commonly regarded as the foundation date of the Hanseatic League.