In 1943 a shipwreck was found in Kolding inner fjord which was identified as a cog and dated to 1200-1400. Parts of the wreck were studied by Nationalmuseet and the Handels- og Søfartsmuseet's technical consultant on shipping. Most of the wreck remained at the bottom of the fjord, but parts of it were placed both in the bank at the mouth of Kolding å river and in an iron barge on the bed of the river.In connection with the Nationalmuseets Marinarkæologiske Forskningscenter's research into the oldest Danish ships, the wreck was raised from the bottom of the fjord in 2001, investigated and measured.

Origin of the Cog

The cog is a Northern European ship type thought to have originated in the North Frisian or west Danish tidal flats. In historical sources of the 9th century
cogs are already mentioned. On the coin from Birka is an early cog type without a sternrudder. 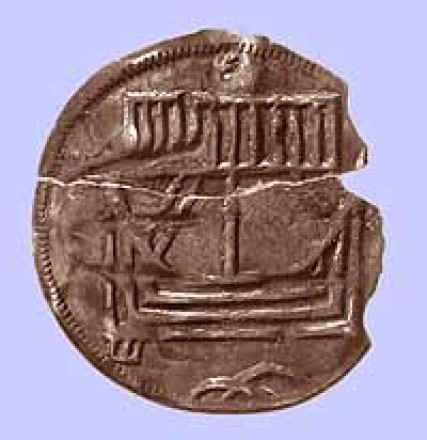 Cog on a coin from Birka in Sweden

Cog the Medieval bulk carrier. The cog replaced the Viking ship as Northern Europe's war and trading ship of choice, and the merchants of the Hanseatic towns in particular knew how to exploit the large new ship type. The cog had a considerable load capacity for the transport of mass goods such as herring in barrels, grain, and timber, precisely those goods which the Hanseatics transported from the Baltic region to England and the rest of Western Europe. Using cogs, the Hanseatic merchants and skippers sailed, from around 1200, 'ummelandt', which is to say, north of Skagen. They thus created the medieval era's extensive maritime trade between the Baltic States and Scandinavia at one end and England and the Western and Southern European countries at the other. The cog was the backbone of this maritime trade and thus the foundation of the economic and cultural upswing which Northern Europe experienced in the Middle Ages, and which Northern European-North American culture builds upon to this day.

Earliest find of a Cog with a stern rudder.

Dendrochronological research dated the oak of the hull to 1190 AD.

The oaks grew in south Jutland between Ribe and Kolding.

The cog is a wide, flat-bottomed ship with a straight stem and prow and high sides. The keel was a solid timber on which the prow and stern were built. The flat bottom was carvel-built (the planks lay edge to edge), while the sides were clinker-built (the planks overlapped). Originally cogs had one mast with a square sail. The oldest cogs had rudders like Viking ships, but the later ones had stern rudders. 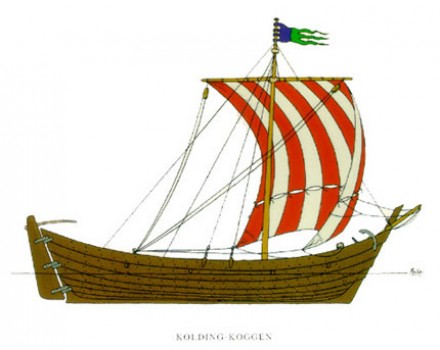 Impression of the Kolding cog.

The Kolding cog is the best preserved of the Danish cogs. Approximately 70% of the ship is intact and can be reconstructed with confidence