The location indicates that the ship was built for pharao Cheops. Cheops or Khufu was buried in the Great Pyramid, he was the 2nd pharaoh of the 4th Dynasty of the Old Kingdom of Egypt. The boat was disassembled and buried in a pit near the Great Pyramid in the Giza pyramid complex.

In the 1950s two enormous pits dug deep into the rock and covered with 82 massive limestone blocks, each weighing 18 tons, measuring 5 to 6 feet and joined with thick mortar, were discovered along the southern side of the Great Pyramid of Khufu.

A second ship has been located in the other boat pit beside Khufu's pyramid but has not yet been excavated. In all, seven boat pits have been identified around the Great Pyramid. Five of which belong to the Great Pyramid proper.

The history and function of the Khufu ship are not precisely known. One theory connects the ship with the sun god Ra and the resurrection of the deceased king, and therefore referred to as a "solar barge", a ritual vessel to carry the resurrected king with the sun god Ra across the heavens. However, it bears some signs of having been used in water, and it is possible that the ship was a funerary "barge" used to carry the king's embalmed body from Memphis to Giza.

Revealing the Second Boat of Pharaoh Khufu by Remote Sensing

Photography of the interior revealed a disassembled boat. Much like the one that was opened in 1954, the second pit contained stacks of wood with pieces of the cabin arranged on top. This second boat appeared to be smaller than the first and had four small pointed oars. The pressure inside the chamber was identical to that outside. The temperature measured 27° Celcius, and the relative humidity was 85%. 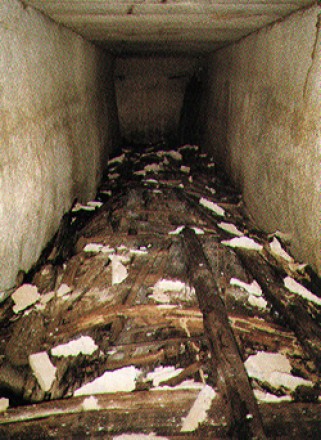 Inside the western boat pit.

Solar barge, ancient Egyptian rowing vessel. The world's oldest intact ship has been described as "a masterpiece of woodcraft" that could sail today if put into water. The ship was built without any nails; the pieces of wood are held together solely by the use of tenon and mortise joints. The restored ship consisted of 1224 pieces of wood in 651 major groups which had been partly dismantled and stacked in 13 successive layers in the pit. 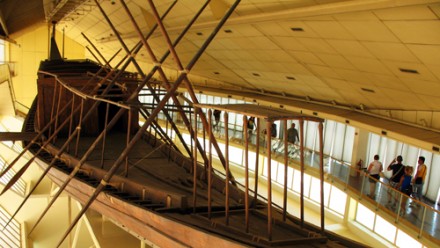 Stern of the Khufu ship. 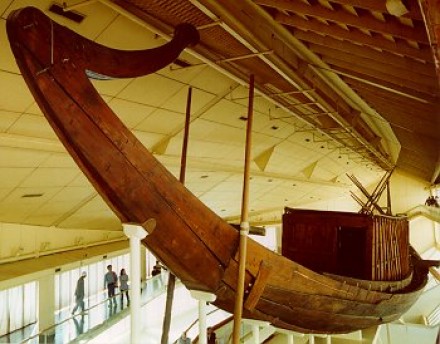 The Khufu ship, in the eastern pit, was restored during a process that spanned ten years. The ship is on display in the Khufu Boat Museum near the Great Pyramid. Although the boat is well preserved and protected since 1986, the boat had shrunk about 0.5 metres since it was assembled in 1966. It was feared that such deterioration may have been caused by the changing environmental conditions inside the museum. 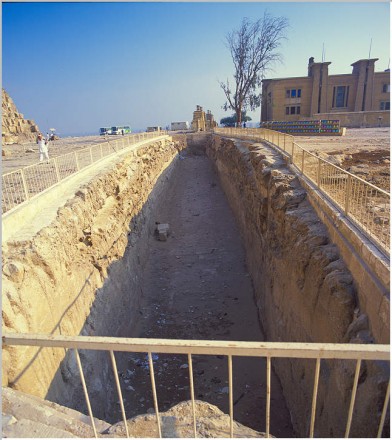