When the Kaiyo Maru was launched in 1865, it was the largest Dutch wooden warship ever built. The Kaiyo Maru was also one of seven steamships that played a major role in the naval battles of the Boshin War (1868-1869), a civil war between shogunate and pro-imperial forces that would ultimately lead to the Meiji Restoration (see below). The Kaiyo Marunever made it to the final battle however, having been wrecked during a typhoon on 15 November 1868 off Esashi, Hokkaido.

The wreck of the Kaiyo Maru was discovered in 1968. Full-scale salvage operations began in 1975 and lasted until 1985. By 1990, a replica had been made. This replica still exists today and is anchored at the Esashi docks, where it functions as a museum.

A background story: The reopening of Japan

In 1853, after having been virtually isolated for 212 years with the Dutch as their only European partners in trade since 1641, Japan slowly but surely opened its doors to the West. This paved the way for nations such as France, England and the United States to gain in on the trading privileges of the Dutch. The military ruling power of Japan, the Tokugawa shogunate, was more than impressed by the technological advancement of their new and future partners in trade. Fearing the military potential of these newcomers, the Tokugawa government hastily released the centuries-old ban on building large, seaworthy ships in order to start catching up. Also, knowing that without a proper navy Japan would be an easy target, the Tokugawa government turned to their long-time Dutch friends and ordered several warships in order to kick-start a Japanese naval force from scratch.

The Dutch, who already since 1844 advised Japan to open up their borders by their own terms instead of being forced into meeting demands, foresaw a means to maintain and build upon their advisory role and immediately worked behind the scenes to meet Japans requests. By 1855, the Dutch had granted the Soembing as a gift to Japan, which was then renamed to Kanko Maru, and had set up a naval training school in Nagasaki. By 1865, the Kaiyo Maru joined the shogunate fleet which by then had modestly been expanded. 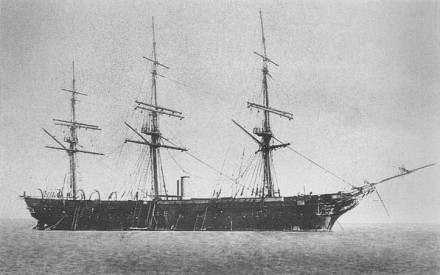