The ship 't Huis 't Krayensteyn sailed for the Dutch East India Company (VOC) as a merchant vessel between patria and the Indies. Despite a quick voyage with no sick or dead, she wrecked 3 miles of the coast of the Cape on 27th of may 1698.

She left Holland from the province Zeeland with 275 people on board. When she reached South Africa, the ship was smashed against rocks by a strong current. In the African winter it is normal that there are heavy storms and strong currents.

Measures were taken to salvage the wreck. Sixteen chests of specie were saved out of the nineteen on board of the ship. 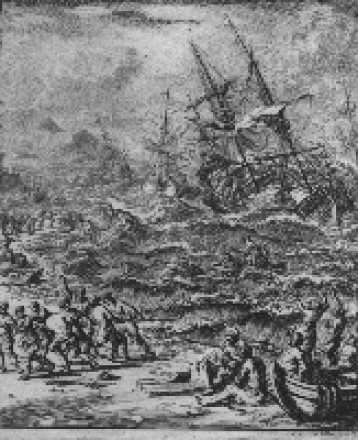 Example of storm at the Cape (1692). Source: Atlas of Mutual Heritage. 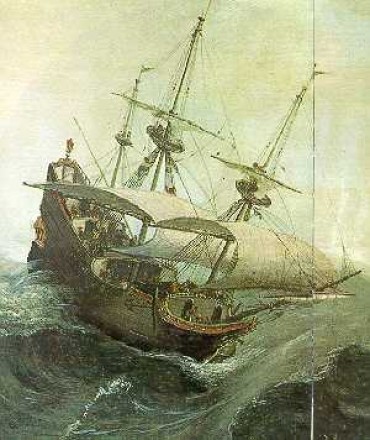 Since the salvage attempts of the 17th century the site of Huis 't Krayenstein has been heavily depleted by salvage operations. Artifacts such as coins and brass cannons had been recovered.

In the 1960's a salvage expedition was led by Tom Asaro. During the expedition they recovered specie, pewter spoons, clay pipes and lead caps. These items were donated to the South African Museum.

All that is left today on the site are 7 cannons and 5 anchors, conclomerate and small ceramic shreds. The wreck is situated in a sheltered bay and therefore easily accesible for shore diving. There is a lot of concretion and kelp on site. 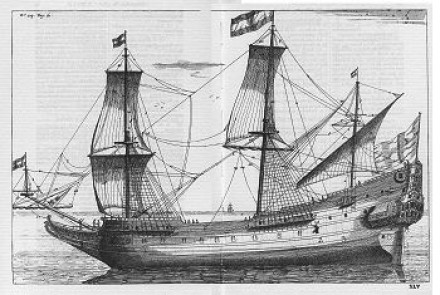 Drawing of a pinas in Nicolaes Witsen, 1671.