On 3 October 2016, an unknown shipwreck emerged at the southern spit of the island of Sylt as a consequence of an ongoing coastal erosion process. For about 300 years it had been covered by a sand dune (cf. base map of 2014 below), but in October the dune retreated and the wreck lay unsheltered in a high-energy intertidal zone and was only accessible at low tide in offshore winds. It was investigated by the responsible authority – the State Archaeology Department of Schleswig-Holstein (ALSH) – and the difficult site conditions necessitated a swift investigation before the wreck could be reclaimed by the sea, employing a SAPOS survey, structure-from-motion modelling, dendrochronological sampling as well as manual recording on two wreck sections in October and December 2016, respectively. 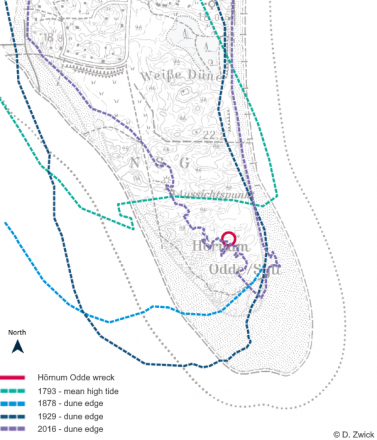 This illustration shows the wreck site in relation to the historical changes in the coastline of Sylt's southern spit – the Hörnum Odde. The base map is from 2014. The erosion has advanced considerably since then and the dune edge had advanced close to the wreck site in the summer of 2016 (as inferred from an aerial photo, represented by the purple line), a few months before its discovery.

On the basis of the particular construction and size of the wreck, it can be tentatively associated with a ship of the Dutch West India Company (WIC), which ran aground near Hörnum after having lost her rudder in December 1703 according to a local chronicler.

While the frames in the stern section are of oak, the floor-timbers in the midship section are of pine. This indicates that this must be the wreck of a merchantman, as the loadbearing capacity was increased by the use of lighter timbers in less critical sections of the hull.

The study of the construction revealed several characteristics diagnostic for the ‘Dutch flush’ method, a shell-first variant of the carvel method, as still practised in the Republic of the Seven United Netherlands in the 17th century. These have been described by contemporaries like Nicolaas Witsen (cf. image below) and Cornelis van Yk, e.g. with regards to the use of spijkerpennen (wooden pins) associated with cleats, which held the planks temporarily together before the floor-timbers were inserted. The frame assembly is also very distinctive, as its components are relatively slender, and floor-timbers were not interconnected with futtocks. This is contrasted by the use of massive planks, which were bent over fire. 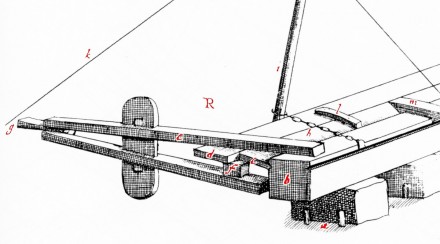 Moreover, the wreck featured a double oak planking – known as ‘Double Dutch’ – and the partially intersecting treenails that are concomitant with the addition of the second layer. Particularly ships of the Dutch East India Company (VOC) are known to feature the ‘Double Dutch’ technique, but other ships – like whalers – are also known to have had double planking from historic records. The VOC used double oak planking and additional sacrificial planking of pine as protection against marine borers in the tropical waters of the Indian Ocean. The WIC might have similarly relied on this construction for the same reasons.

The find location on Sylt is not a paradox, as VOC and WIC ships frequently chose a detour through the North Sea around Scotland in order to avoid privateers in the English Channel.

The wreck has not been identified yet, but according to the local chronicle a Dutch merchantman laden with manufacturing goods foundered in 1703 near Hörnum with no survivors. This was at a time of widespread lawlessness, when illicit wrecking and beachcombing was ubiquitous. This might have contributed to the fact that so little is known about ship-losses at this time from written sources.

As a consequence of coastal erosion and winter storms, the entire wreck site was reclaimed by the sea at the turn of the year 2016.