The population on the North Frisian islands imported blue glazed Delft ware from the Netherlands. Many tiles depict ships, most under Dutch flag. Especially the larger and more elaborate ship-depictions did not merely serve a decorative purpose, but a biographical one: Those were the ships that were part of the islanders' biographies.

The North Frisian islands were known as "the little East" in the Netherlands and many sailors were recruited here for Dutch merchant vessels operating in the Baltic Sea - especially in the timber trade -, for whaling vessels of the Noordsche Compagnie heading to Greenland and Spitsbergen, as well as for East Indiamen of the Vereenigde Oostindische Compagnie (V.O.C.) - the Dutch East India Company. Despite forming part of the Kingdom of Denmark and the Duchy of Schleswig, the North Frisian islands were a heavily Dutch influenced area, which is also reflected by most of the 17th-18th century shipwrecks.

The best known ship-depicting tile-work is in the Königspesel  (king's parlour) on Hooge's main terp, which was captured also in Jacob Alberts' reknowned painting of 1893 (pictured below).

It was created in 1766 by the Dutch artist Pals Kartsen from Harlingen in West Frisia and was commissioned by Tade Hans Bandiks (1724-1808), who was a captain from Hooge in Dutch service. It depicts the ships he commanded, i.e. the Cornelia en Maria (below, left), which was lost in a storm in 1760 near Landskrona (Sweden) with a cargo of timber from Frederikshaven (today: Hamina, Finland) destined for Amsterdam. Also his new ship is depicted, the Anna Maria (belwo, centre), which he commanded since 1761. 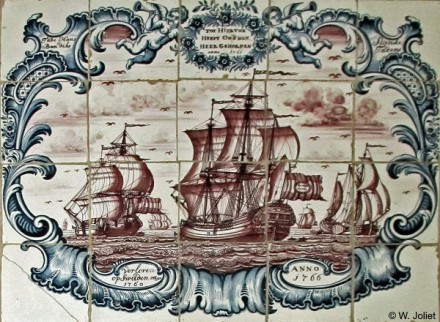 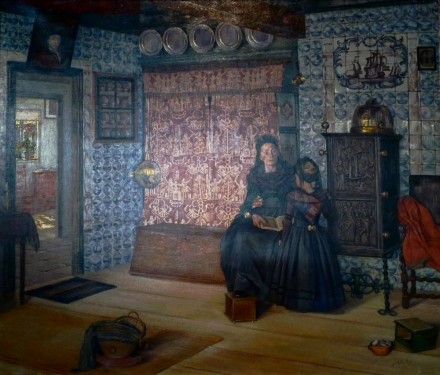 Another interesting tile-depiction is found on another terp of Hooge. It was also created by Pals Karsten, but it shows a three-masted galiot named Victoria under the merchant flag of Zarist Russia. This vessel is associated with a ship commanded by a Frederik Jacobs, which appears to be the Hollandised name for Frerck Ips(en), who also was a Hooge captain. This ship also operated on the same timber-trading route (Frederikshaven - Amsterdam), was owned by a Dutch shipping company, but registered in Riga, which was part of the Russian Empire at that time. 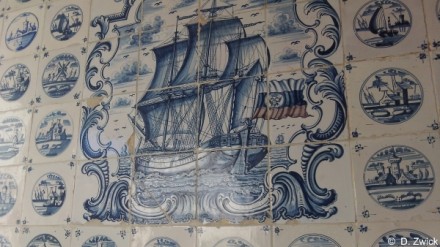 The first tile-depiction is open to the public and can be visited in the privately run Königspesel museum. The tile-depiction of Victoria is in a private house on Hooge.