The Hollandse rode Leeuw* was an East Indiaman of the VOC.

In August 1616 the Dutch on Ternate (Molukken) decided to send a fleet to the Philippines to attack the Spanish there. The fleet consisted of 10 ships o.l.v. Jan Dirksz. Lam: The Nieuwe Zon, The oude Maan, The oude Zon, Vlissingen. The Engel of Delft, De nieuwe Maan, Ter Veer, Hollandse Rode Leeuw, De Aeolus en de Walcheren. A battle was fought on 14 April 1617. 3 Dutch ships perished. The rest got away. The Hollandse Rode Leeuw travelled from the Philippines to Japan, together with the Vlissingen.

The Hollantsche Leeuw arrived in Japan on the 18th July 1617, where it anchored in Kawachi bay, just 1 km south of the Dutch trading post in Hirado.

Between 1609 and 1641 the VOC held a trading post in Hirado, Japan. Within the vicinity the Dutch used several locations for their marine activities, including a deep bay known as Kawachi bay which functioned in sheltering large ships, just a few km south of Hirado village. During the early years of the VOC's endeavours in Asia, the Dutch trading post at Hirado served as an important location where ships could be serviced. This was dearly needed, since the warm Asiatic waters proved an ideal environment for shipworm (Teredo navalis) which feasted on the wooden hulls of ships. Many ships therefore needed repairing after staying a while in these often tropic conditions and were sent to places including Hirado, where they were cleaned, renewed and given double hull layers. 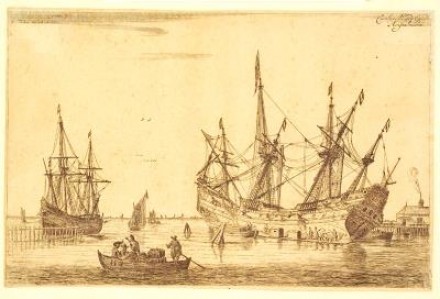