This V&W class destroyer was included in the 10th Order of the 1916-1917 Programme for build by Doxford and laid down in June 1917. The ship was intended to be named HMS Whitby but, as the name was incorrectly written when selected, she was given the name Whitley when launched on 13th April 1918. She was completed on 11th October 1918.

During 1919-1920 she served in the Baltic for operations against the Bolsheviks.
She was placed in the Reserve Fleet by 1921 as part of the 9th Destroyer FLotilla at Rosyth and did not serve with the Fleet during the inter-war years. As part of the rearmament programme in 1938 she was the first of her class to be selected for conversion to an AA Escort (WAIR) by HM Dockyard Chatham. Her conversion began in August 1938 and on completion in 1939 she commissioned for service. 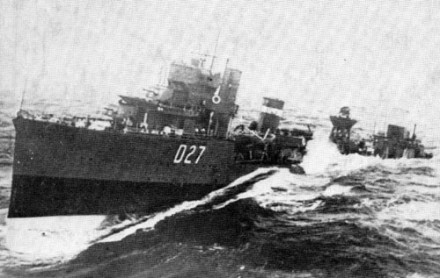 Destroyer of the V & W class.