HMS Prince George after a refit in 1904.

The Prince George was still assigned to the 7th Battle Squadron when World War I broke out. Early in the war, the 7th was attached to the Channel Fleet, but in 1915, the squadron, along with Prince George, was sent to the Mediterranean to participate in the Dardanelles Campaign. As part of this campaign, Prince George bombarded Turkish forts and supported operations at Gallipoli, including the evacuation of the peninsula. After the evacuation of Gallipoli, virtually ending the naval Dardanelles Campaign, Prince George spent the remainder of the war in the UK. She initially served as an accommodation ship, but then was converted to a depot ship for destroyers in 1918. She served in this position for about a year, during which her name was changed to Victorious II. Her name reverted to Prince George at the end of this period.

She was transferred to Sheerness in 1919 and was placed on the disposal list there on 21 February 1920. Over a year later, she was sold to a British firm for scrap but was then resold to a German firm in December 1921. During the voyage to Germany for scrapping, Prince George ran aground during a storm and wrecked on 30 December 1921, on the main beach of Camperduin in the Netherlands.

Prince George was a Majestic-class battleship. She was built at the Portsmouth Dockyard and launched on 22 August 1895. Her propulsion consisted of two 3-cylinder steam engines and her displacement was 16,060 tons. The vessel had 52 guns and five torpedo tubes. Her armour was 2.5 to 14 inches thick, depending on location. Prince George was decommissioned on 21 February 1920.

HMS Prince George was a pre-dreadnought battleship. The Majestic class had nine completed ships, making it the largest class of battleships in history. Before the Majestic class, naval ships were developed quite chaotically. The British standardized their warship design with the Majestic class, and this design was copied by dozens of ships in navies all over the world. 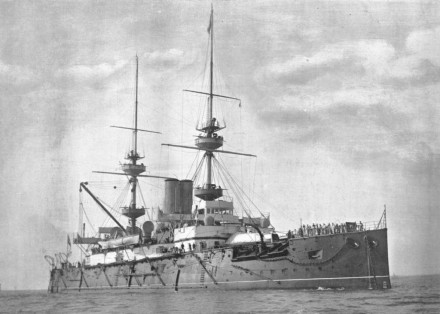 The Prince George wrecked on the main beach of Camperduin so near the shore, she could be clearly seen rising out of the water. She was soon stripped of all valuable materials and left to serve as a breakwater. 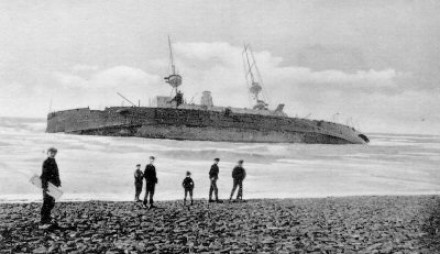 HMS Prince George seen from the beach soon after her wreck.

The wreck of Prince George has been under the control of a Dutch water management agency since her sinking. The wreck was a popular site for photographs by visitors to the beach, but in 2014 it was announced that the wreck would be covered with sand as part of a shore strengthening project. The sand-filling process of this project was completed in July 2014, and the wreck of Prince George can no longer be seen from the beach in Camperduin. 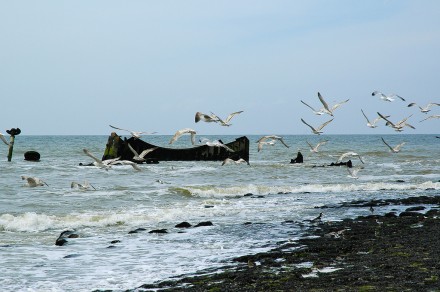 Wreck of Prince George seen from the beach almost one hundred years after the wrecking event.