Underwater archaeological surveys in Hedeby’s harbour area began as early as 1933, but the most extensive results were produced during the 1979/’80 excavation of the harbour, which offered major insights into the pier structure and Viking Age shipwrecks. Hedeby was one of the major commercial centres of Viking Age Scandinavia, an emporium, embedded in a long-distance maritime trade network with a reach ranging from Iceland to Byzantium. Aside from the rich archaeological assemblage of commodities, artwork and handicrafts from all corners of the then-known world, Hedeby’s significance as an international trading place is also reflected in early medieval written sources, like the 9th-century voyage of the Anglo-Saxon seafarer Wulfstan to Hedeby, recorded in Orosius’ Historiae.

The harbour area of the Viking Age settlement of Hedeby (German: Haithabu) encompasses around 8 hectares of the Haddeby Noor, which marks the southwestern extent of the Schlei Fjord where the Jutland Peninsula forms an isthmus of some 16 kilometres to the marshy river valley of the Treene – a tributary of the Eider – which empties into the North Sea. Despite its location deep inland, Hedeby was a seaport and an important point of transhipment between the North Sea (via Hollingstedt) and the Baltic Sea. Not only the strategic location between the North Sea and Baltic Sea but also its location in the borderlands between Danes, Frisians, Saxons and western Slavs (Abodrites) abetted Hedeby’s rise as one of the most important commercial centres and harbours of the Viking Age. 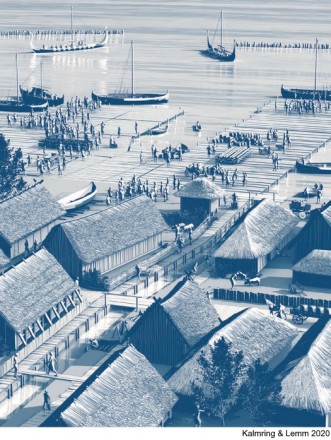 This is reflected by large pier structures built since the 860s, where sizeable vessels with draughts up to 1.3 metres and later 1.5 metres could be moored, as well as by shipwrecks, like the fragmented remains of a clinker-built vessel constructed after 961 with mixed Scandinavian-Slavonic features (Haithabu II), or the remains of a large sea-going merchant vessel of the knarr-type built around 1023 (Haithabu III).

Hedeby formed a part of the defensive infrastructure of the Danevirke: its ringwall was connected with the Danevirke’s earthworks and, according to the Royal Frankish Annals of 804, Hedeby’s harbour also served a military purpose. This is evidenced by the scorched remains of a royal longship (Haithabu I) built locally around 982, which fell victim to a fire sometime between 990 and 1010 at its moorings. The harbour was also important for fishermen and ferrymen, as indicated by the rich find assemblage of fishing gear and fishbones as well as two Viking Age logboats (Haddeby 1 and 2), and a pram built around 1184 (Haithabu IV). The latter dates back to a period when Hedeby was already abandoned after it was sacked twice; in 1050 in a Norwegian attack and again in 1066 in a Slavonic attack. The settlement became deserted and trading activity shifted to the newly founded Schleswig some 2 kilometres to the north.

Only about 3% of the harbour area has been archaeologically investigated so far. Fine sediment particles and algae in the water column have reduced the visibility to almost nil, therefore, archaeological remains can only be felt. Moreover, the possibilities for non-intrusive acoustic surveys are limited by the fermentation gas inclusions in the sediment. On the other hand, the low salinity and the anaerobic milieu beneath the peat clay layer constitute excellent conditions for organic preservation, so Hedeby harbour continues to have great potential for new discoveries.

In 2018, Hedeby became a UNESCO World Heritage Site as part of the Archaeological Border Landscape of Hedeby and the Danevirke. On the site of ancient Hedeby, an open-air museum with Viking Age house reconstructions is situated. The museum also runs a boatyard where Viking Age ships are reconstructed. 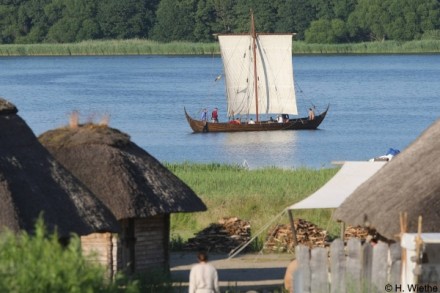 The open-air museum and the Schleswig-built Viking ship reconstruction Sigyn.