The ship Den Haan was a yacht sailing for the Dutch East India Company (VOC). This type of ship was used for cargo transport within the Asiatic region. On previous voyages the ship Den Haan transported items such as sugar, diamonds and pepper. On her last voyage she had Chinese porcelain and silver bars on board.

The ship Den Haan sank on the 20th of May 1628 in Bay of Batavia (present day Jakarta). This was the most visited harbour in the East and the central point from where the inter Asiatic shipping took place.

Ships in the bay of Jakarta (Batavia).

The wreck of the ship Den Haan has been discovered and excavated by the salvage company Maritime Explorations. This project was led by Michael Flecker, who is the director of the company Maritime Explorations. Reports regarding this excavation are not available at the moment and have yet to be released. Archaeologically we can thus provide no information on the state of the wreck site and its mobilia. Hopefully there will be an excavation report available in the future. All that we know is from a short description by Michael Flecker in the Newsletter of the Nautical Archaeology Society stating the following: 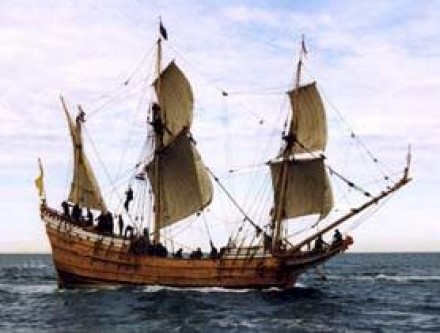 Picture of the Duyfken yacht replica, a ship similar in its type as the ship Den Haan.

The ship was salvaged by the company Maritime Explorations (archaeological salvage and engineering). Michael Flecker led this expedition.