The Anglo-Saxon boat was discovered in 1970 near the village of Graveney, in Kent. The boat lay in a silted watercourse in what is now an old marsh. 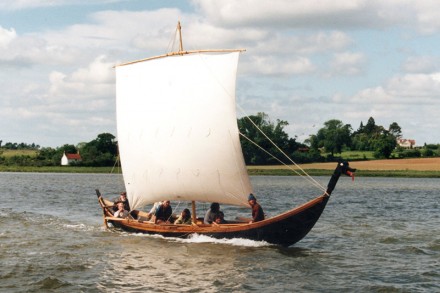 Replica of an Anglo-saxon boat the saewide.

The boat has been reconstructed at about 13.60 m long, 4 m wide and 1 m high amidships. A hydrostatic study shows that it was seaworthy and was capable of sailing with a cargo of 6-7 tonnes. The low freeboard, however, would make the boat dangerous in a rough sea.

The boat was in use in the trans English Chanel trade. Fragments of Mayen lava querns from the Rhine land and traces of hops suggest former cargoes.

A flat keel had eight strakes fastened to ten frames. Iron rivets, some fastened through wooden pegs, held the overlapping strakes, with a caulking of wool treated with vegetable tar. The frames were attached to the strakes by treenails of willow.

3D impression made by Selin Ali.

The boat was presumably pointed at both ends originally, though only part of the stern had survived.

The boat was carefully removed by the National Maritime Museum to be conserved and stabilized by the Mary Rose Trust.