The Galiasse was a fluyt, built and dispatched by the VOC Chamber of Hoorn in 1627. Between 1627 and 1632 she made several journeys between the Netherlands and the East Indies. When the Galiasse set sail from Texel to the East Indies in 1634, she would stay in the East until the year 1639. After twelve years of service she was finally deemed beyond repair and therefore demolished in Hirado on the 24th of September 1639.

Hirado is a small fishing village situated in the south west of Japan, in the north western part of Kyushu. In the year 1609 the Dutch had established a trading post in Hirado. The port of Hirado was the centre for foreign trade in Japan until Japan closed most of its borders for the outside world in 1641. All Portuguese merchants, Jesuits and their Japanese following were banned from the country, while only the Dutch and Chinese merchants were allowed to continue their trade with Japan through the port of Nagasaki, until Japan reopened its doors to the outside world in 1853.

Jan Pietersz Coen
In 1627 Jan Pietersz Coen the founder of Batavia (1617) traveled incognito on the Galliase from Holland to Batavia. He was reappointed as governor-generalbut the English and part of the Dutch Staten general were not in favour of his reassignment. After his arrival in Batavia, the English abandoned Batavia and established their headquarters in Bantam.

Type: Fluyt. Built in 1627 for the Dutch East India Company(VOC) of the chamber of Hoorn. 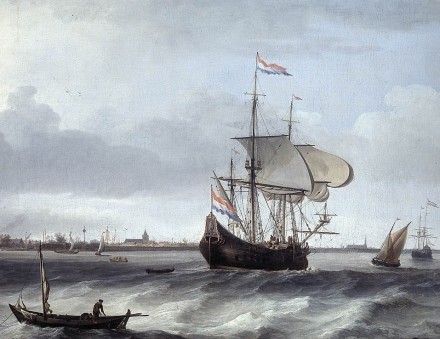