The Expeditie or rather Expedition as it was first called, was originally an English ship sailing under the flag of the East India Company. Built in London before 1613, she was part of the Company's twelfth voyage to the East. With Christopher Newport as captain, the Expedition started her voyage at Gravesend (Kerr 1813, p.138).

In 1620, the ship was captured by the Dutch at the Isles of Tecoo in the Moluccas, after which she was renamed Expeditie.That same year the Dutch had brought her to the Dutch trading post in Hirado. The English, who neighbored the Dutch in Hirado, could do nothing but watch the Dutch taunt them with their prize, as the Japanese authorities had previously strictly forbade the Dutch and English to wage their wars in Japanese waters.

During the night on 04-09-1920, a typhoon hit the vicinity. In the midst of the storm, the cables of an English vessel named the James Royal lbroke loose and damaged the neighboring Expeditie in their fall. The Expeditie suffered severe damage and she immediately sank in the harbor. 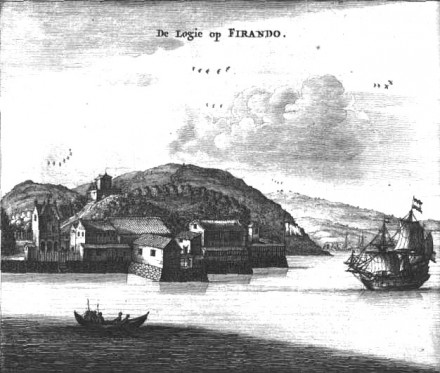 The Dutch trading post at Hirado as depicted in Montanus' Gedenkwaerdige Gesandschappen (1666).

A year later, the wreck still was not salvaged, even though it hampered harbor traffic. Local feudal lord Matsuura therefore demanded the Dutch and English to clear the wreck from the harbor floor, threatening to expel all further trade if they refused. The English then reminded all involved that it was a Dutch ship that sank, while in an attempt to escape full payment, the Dutch in turn reminded the English that the James Royall had caused the wreckage. After much haggling and delaying, the English finally offered the Dutch part of the payment. Eventually, the Expeditie together with nine of her cannon were salvaged in 1621.

Hirado is a small fishing village situated in the south west of Japan, in the north western part of Kyushu. The Dutch (1609) and the English (1613) both established trading posts in Hirado as at the time the port of Hirado was the centre for foreign trade in Japan. Shortly after the taking of the Expedition, the English and Dutch signed an alliance and combined their fleet, with Kawachi - 1 nautical mile south of Hirado - as their main harbor. The English left Hirado in 1623 due to heavy financial losses.

The Expeditie was partly salvaged in 1621. More cannon, anchors and shipwreck material may have been preserved in the muddy harbor floor.