The wrecksite is scattered over a steep slope of bedrock at a depth of between 4-15 metres. Much of the cargo has been discovered at a distance to the structural remains of the wreck, so the loss of the ship has been interpreted as full capsize.

The site was discovered by marine biologists who spotted a Romanesque church bell (cf. photo) and pottery remains on the site. 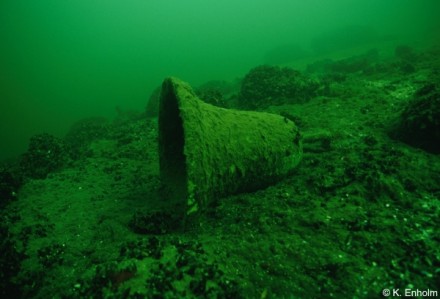 The site was initially mapped by a sports diver group called Rannikkosukeltajat ry in 1998, 2000, and 2001, followed by fieldwork carried out by the National Board of Antiquities of Finland under the lead of Riikka Alvik in 2001 and 2003, and Stefan Wessman in 2005 and 2006. While the first campaigns were focussed on the cargo assemblage scattered across the seabed, the 2006 campaign focussed on the structural remains of the wreck.

As a dendro-analysis has not been carried out, the interpretation of the wreck's presumed origin and route focussed mainly on the cargo, especially the ceramics. In her thesis, Riikka Tevali re-examined the entire ceramic assemblage lifted from the wrecksite between 1996 and 2007 and was able to associate the stoneware with the Fredelsloh-Bengerode production centre in Lower Saxony, with a production date between 1250 and 1270.

Based on the cargo assemblage, which included also whetstone schists most probably from Norway, limestone ballast, bronze cauldrons and Osmund iron, a hypothesis on the sailing route was presented in Daniel Zwick's doctoral thesis, who suggested Rostock as port of transshipment and departure, and Tallinn as likely destination.

Although the constructional characteristics of the shipwreck itself has not been studied in depth due to the nature of the site, it was confirmed to the author that some of the observed characteristics point to a Bremen-type construction (Stefan Wessman, pers. comm.), also referred to as "bottom-based" type, which is commonly associated with the historically known "cog" type.

The site is protected in situ by Finnish law, and the National Board of Antiquities of Finland cooperates with sport diver groups who carry out site monitorings. Nontheless, the first campaigns concentrated on lifting all visible artefacts for fears of looting.