The d'Eenigheid was a Dutch snow (snaw or snauw) ship, built by the Middelburgse Commercie Compagnie (MCC). The construction of the vessel started in 1755, with the re-use of the keel from the Grenadier, a frigate of the MCC, and was then put on halt for a couple of years. In 1758 the vessel was launched and it was finished for its first journey in 1759.

The ship was about 80 feet long and had a tonnage of 60 ¾ last. It had two square rigged masts, with on the main mast a snowmast with trysail, which is typical for a snow ship. It was equipped with a boat and a sloop, which were carried on board during its time at sea. When reaching coastal areas the boat was set overboard and was able to be rowed or to be sailed. It had a small mast with a foresail and a jib. For its third journey it is known the ship was carrying ten canons on naval carriages and six small caliber canons. Adriaan van der Bilt constructed the figurehead of the ship, a lion, and the name on the transom of the ship.

The Vrouw Maria, found in the Baltic Sea, was also a snow ship and probably had similar characteristics. The ship, also Dutch, was in 1748 refitted and rigged as a koff. She sank in 1771.

When sailing as a slave ship in the triangulartrade between Europe, Africa and the Caribbean, the ship was modified for thetransportation of enslaved people. A partition ,with door, was placed on thewaist deck to prevent the slaves to enter the afterdeck. The door waspermanently guarded. There was also a wooden accommodation built for the womento stay in during daytime, two toilets for the slaves, a caboose and in thebetween deck an extra floor was made to fit more slaves. 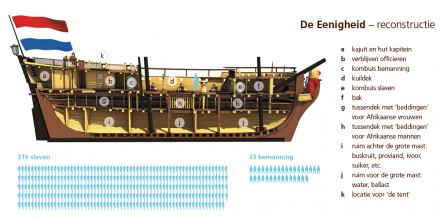 Reconstruction of the ship, with the number of people on board: 319 slaves and 33 crewmembers.

A total of five trips were made with d'Eenigheid. The first two were transatlantic trade voyages from the Netherlands to Curacao and back. The last three journeys of the ship were triangular slave trade journeys from the Netherlands to western Africa to buy slaves and then sell them in the Caribbean. On the outward run, the ship's cargo consistedmainly of goods, like textile, gunpowder and riffles , meant for the trading of slaves, gold and ivory in Western Africa. During the third journey of the ship a total of 319 slaves were bought. The money earned with the sale of slaves in the Caribbean was spend on sugar, coffee beans and tobacco, which was, together with the in Africa bought gold and ivory, taken back to the Netherlands.

After its fifth journey d'Eenigheid was stuck in stormy weather on the North Sea after the pilot got lost due to the poor visibility. After seven days the ship spotted the west coast of the island of Schouwen on the 6thof November 1767. With a new Dutch pilot on board the ship hit the seabed several times and on the 7thof November the captain and officers decided to aboard the ship. Eventually the ship was heavily damaged by the waves and sank. The ship and its cargo could not be saved.

The MCC was a Dutch trading company, founded in 1720 in Middelburg, Zeeland, the Netherlands. The MCC was a smaller company than the VOC (Dutch East India Company) and WIC (Dutch West India Company), but was still active long after the VOC and WIC were gone. Besides trade with the Baltic Sea and the Mediterranean Sea, the MCC was active in the triangular slave trade. During its existence, a total of 296 journeys were undertaken of which a 114 were slave trade journeys. From 1756 on the MCC was more or less specialized in slave trade, until the slave trade came to an end in de early 1800's. From 1756 until 1807 a total of92 slave trade journeys and 22 different journeys were undertaken. In its later years the MCC focused on ship building, until the company's ending in 1889.

The MCC's archive and d'Eenigheids blog

The MCC has an extensive, almost complete and well-kept archive and is therefore an important source of information regarding the triangular slave trade. The archive was added to the Unesco Memory of the World register in 2011. The documents of d'Eenigheids third journey have been digitalized and the daily journals of the journey have been published in blogform on a daily bases between 2013 and 2015. 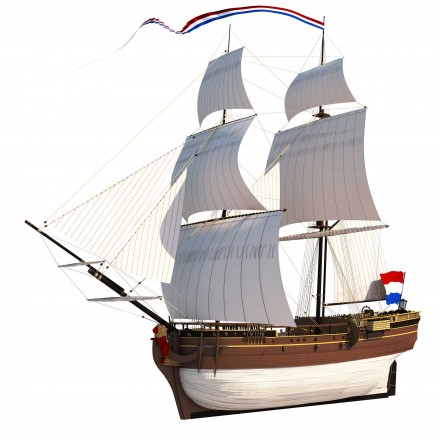