The first recorded chart of the Australian coast line was made by Duyfken's skipper, Captain Willem Janszoon, and the first time recorded in history when Aboriginal Australians met people from the outside world occurred during Duyfken's 1606 voyage of discovery.

In 1601 went to The Indies as the jacht, or scout, for the "Moluccan Fleet. Duyfken's captain for this voyage, Willem Cornelisz Schouten, would later together with Le Maire discover and name Cape Horn after the city of Hoorn(1617).

On Christmas day the five ships of the Moluccan Fleet reach Bantam (Banten), Java and encounter a blockading fleet of Portuguese ships totaling eight galleons and twenty-two galleys. They engage this fleet in intermittent battle until driving them away on New Years day. This is a turning point in history: the undisputed dominance of the Iberians (Portuguese and Spanish) in the Spice Trade to Europe was over. 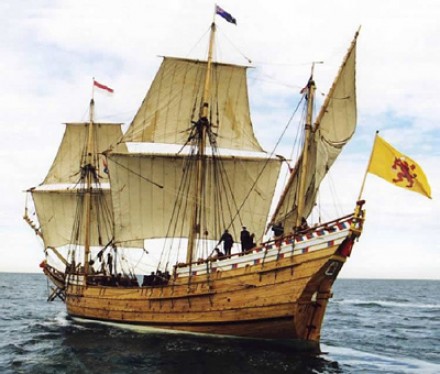 In December 1603 Duyfken sets out on a second voyage to the Indies in the VOC fleet of Steven van der Haghen and with Willem Janszoon as skipper. Early in 1606 Willem Janszoon and Jan Roosengijn take Duyfken southeast from Banda to the Kei Islands, then along the south coast of New Guinea, skirting south of the shallow waters around False Cape and then continuing east-southeast until they reached Australia near Cape York. These were the first Europeans to chart part of the Australian coast.

In 1608 the Duif was engaged in a five hour battle with three Spanish galleys. In June Duyfken is sent as part of a flotilla to capture the fortress of Taffaso on Makian Island. A month later she is brought inside the reef at Ternate for repairs. It seems that she was hauled on her side to repair the bottom but this caused further damage and she was judged unrepairable. 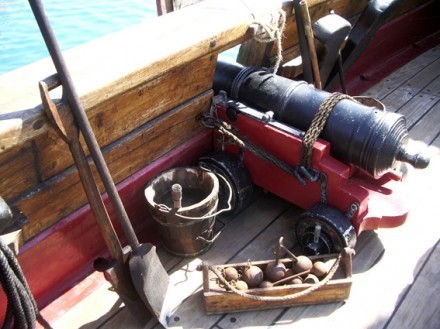 A fast, lightly-armed ship intended for small valuable cargoes or privateering. Built in Amsterdam one year before the Dutch East India Company (VOC) was formed. In use by the VOC from 1602 -1608. 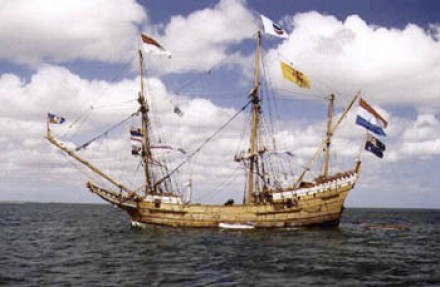 Duyfken replica on her way from Australia to Holland.

Research to reconstruct the design of Duyfken, a Dutch jacht built at the end of the 16th-century and used for exploratory voyages, drew on five major types of data.

Duyfken's hull is European Oak from Latvia, her sails and rig all natural flax and hemp. She was built and fitted-out in Fremantle using "plank-first" construction. Fire was employed to bend the hull planks and inside frames were added afterwards. The hull was launched on 24 January 1999 and she was able to sail for the first time on 10 July 1999.