A team of volunteer divers from Badewanne, a non-profit organization dedicated to documenting shipwrecks from World War I and World War II in the Gulf of Finland, discovered a nearly intact wreck of a 17th century merchant ship at the mouth of the Gulf of Finland, between Finland’s Hanko peninsula and the Estonian island of Hiiumaa. The team spotted the wreck on the sea floor during a seabed survey at a depth of 85m. The area was extremely active during the world wars and is replete with the remains of minesweepers, U-boats and other casualties of naval conflict, so on the descent the team assumed it was a relic from the first half of the 20th century. They were shocked to find it was a Dutch fluyt ship, a wooden sailing vessel from the 17th century.

Since the Middle Ages, the Baltic Sea has become an increasingly important trade route, as the navies of Holland and England needed endless supplies of wood, tar and hemp, all of which were available around the Baltic. From 13th century the Hanseatic League controlled the trade, but during 17th Century the very efficient merchant navy of the Dutch Republic gained control of this trade. This trade received a significant boost in importance and profitability after Czar Peter the Great founded his new capital St. Petersburg at the estuary of Neva river, in the easternmost part of the Gulf of Finland.

One ship type rised above others and becomes the mainstay of this trade: the Dutch fluyt ship, a three-masted ship with a very capacious hull design, carrying no guns and allowing a very large cargo capacity. In addition, the fluyt ships utilized a very novel and advanced rigging using cleverly designed pulley and tackle systems for hoisting the yards and sails and controlling them. These advanced technical features facilitated a much smaller crew than earlier ship types, making the trade more profitable. Another totally novel feature onboard the fluyt ships was that the entire crew lived “abaft of the main mast” – Master, mates, bosun, cook and all ratings, all occupied the same space between decks, and ate at the same table. This was very unusual in the contemporary society, let alone in highly hierarchic maritime world. The fluyt ships were dominant in the Baltic trade between late 16th to mid-18th century. However, very few of these once common ships have survived, even as wrecks.

The cold, dark, shipworm-free waters of the Easter Baltic preserved the vessel in extraordinary condition. She rests on even keel on the seabed, with most of her rigging scattered around her. It has taken some small damage from a pelagic trawl that swept over the deck from bow to aft, pulling out the masts, some deck timbers, disclocating the stem and damaging the poop deck and the typical fluyt transom between the hoekman (statues of prosperous Dutch merchants flanking the stern). 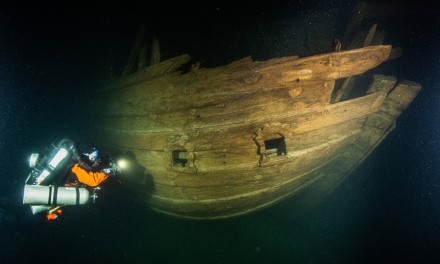 Port side hull view of the stern of the wreck. Decorated stern cabin window holes are visible. (Jouni Polkko/Badewanne.fi)

Only very small bits of the trawl netting remain on the wreck and apart from these damages, the wreck is intact, holds are full, and all side planking is firmly in place. Some of the damaged parts of the transom and hoekman are still in situ on the bottom of the ship behind the stern. There is no damage to the hull so the ship cannot have been dashed onto shoals. The ship probably capsized in a storm. 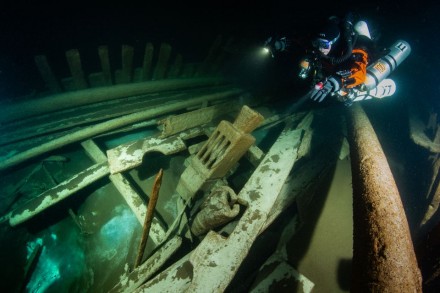 The wreck reveals many of the characteristics of the fluyt. (Jouni Polkko/Badewanne.fi)

“The wreck reveals many of the characteristics of the fluyt but also some unique features, not least the construction of the stern. It might be that this is an early example of the design. The wreck thus offers a unique opportunity to investigate the development of a ship type that sailed all over the world and became the tool that laid the foundation for early modern globalization,” says Dr. Eriksson, Maritime Archaeologist, University of Stockholm, Sweden.

Future of the wreck

The Badewanne team will continue documenting and investigating this significant wreck in co-operation with Finnish Heritage Agency of Antiquities, Cultural Heritage Agency of the Netherlands and other partners including Associate Professor Dr. Niklas Eriksson, Maritime Archaeologist, University of Stockholm, Sweden. 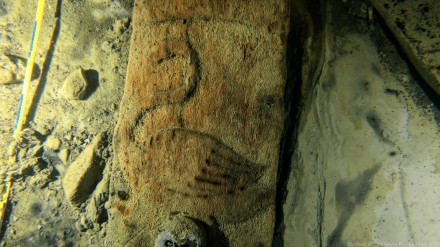 Name of the ship revealed Update 2021

This summer, during the filming of the documentary film ”Fluit”, the diving team found the transom of the exceptionally well-preserved wreck. As the divers succeeded in turning over the transom which was laying face down on the seabed, an engraving with the year 1636 was revealed along with an image of a swan (Zwaan in Dutch). The swan c0uld represent the name of the ship.*