The Drumbeg wreck site was discovered at Eddrachillis Bay, near the village of Drum begin the north-west Scottish Highlands, by local scallop divers around 1994. For several years they carried out preliminary investigations before bringing their discovery to the attention of Historic Scotland in 2011. On behalf of Historic Scotland a field evaluation was undertaken by Wessex Archaeology in 2012.

Although investigations of the Drumbeg wreck have to date been limited in scope, a wide range of material has already been identified at the site. The main site, lying at a depth of approximately 9-12 m, is comprised by three heavily encrusted cast iron guns of possible Swedish design, for use by the Dutch, overlying a section of wooden hull. This structure, comprising futtocks and possible ceiling planking over an estimated length of 15 m, is partially buried in sediment and appears well preserved. Small artefacts identified on the site include a dead-eye rigging block, a number of orange and yellow coloured bricks, cannonballs of various sizes. 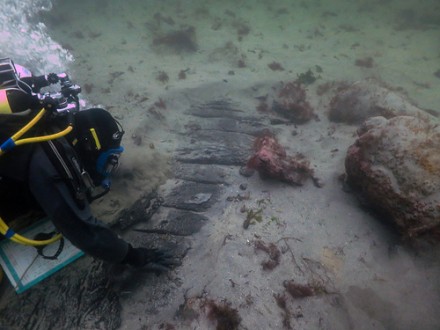 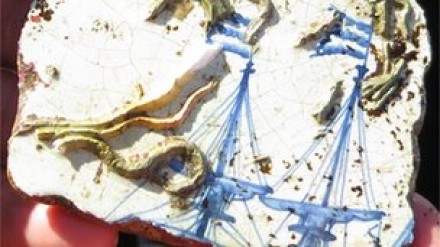 An important clue to the dating and identity of the wreck was found in the form of a painted tile fragment. The blue Delft tile depicts a three masted ship flying the Dutch flag and has been dated by typology to the period 1650 - 1750. As such, the tile suggests that the wrecking of the ship took place after 1650. However, the actual date for the wrecking may be significantly later given the long time depth of the Delft tile designs and their variable use as ballast on board ships, as cargo consignments, or as personal possessions.

Although searches within documentary records have not yet identified with any degree of certainty the name of the ship, one candidate seems to stand out. The probable 17th/18th century Northern European origin of the wreck corresponds most directly to the privately owned merchantman Gekroonde Raaf (Crowned Raven), which was lost on the Assynt coast sometime around 1691.

The wrecking of the Gekroonde Raaf is described according to the story of the skipper Tiert Jelles in a petition to the Privy Council of Scotland. Loaded with severall sorts of limber, such as masts,knappell, hemp and lint, the ship was on its way from Riga to Portugal, when it struck the rocks atAssynt. The ships hull began to quickly fill up with water, but by the providence of Almighty God the crew safely reached the shore. However, soon after their arrival, local country people flocked to the beach to raid the ship, breaking it to pieces. By means of the petition to the Privy Council, Jelleshoped to be allowed to seize his goods. 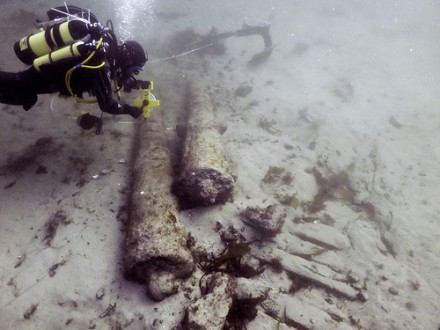 Only a handful of underwater archaeological sites around Scotlands waters that are over 200 years old have been discovered. The Scottish Cabinet Secretary for Culture and External Affairs was therefore quick to designate the well preserved Drumbeg wreck site as the first of Scotlands Historic Marine Protected Areas. Future assessment of the wreck is expected to yield an even wider cross section of material present at the site, given the significant potential for preservation within seabed sediments across the area.