The 30 to 35 meter long and 4.75 meter wide flat-bottomed boat dates from around 100 AD, and is therefore one of the earliest examples of this type of ship.
A special detail is that the bottom planks are fastened to each other with the mortise-and-tenon technique. This is the  typical Mediterranean way of shipbuilding. Roman ships built in the mortise-and-tenon tradition could reach huge sizes. 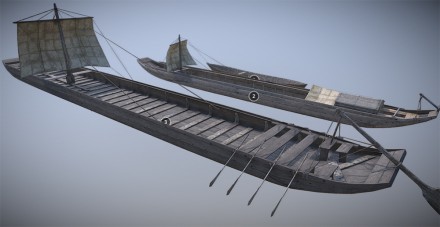 Still from the 3D Impression of the Meern 4.

The Meern 4 is probably sunk as a bank reinforcement against the Roman road and a heavy crib. It was investigated in 2005 for the popular English archaeology program Time Team.

The wooden fittings are placed singly. The Meern 4 was built in the 'shell first' method (see alsoThe Meern 1).

Basalt blocks were found in the ship and also found in the revetment. It is not quite clear whether the basalt stones should be understood as a load or that they later got into the wreck accidentally.

Recent dendro investigation places the origin of the wood in Flanders.

Because the ship's wood was not threatened by construction activities, the ship was covered after investigation and became part of a protected national archaeological monument.