Originally called Erasmus renamed De Liefde (The Love) was the first Dutch ship to reach Japan (19 april 1600). By then it was confisquated by the shogun . The Liefde sank in August 1600 during a storm in the bay of Tokyo.

Mahu & Cordes expedition
The ship was the vice-admiral ship of the fleet of 'Mahu and Cordes'. The fleet set sail from Holland to exploit a route to the East Indies by going west past South America.

The fleet consisted of 5 ships:

The expedition left 27th June 1598 Rotterdam to the East Indies by traveling through street Magellan around South America. Reason for this route was to exploit a new route and to avoid Portuguese presence and try to establish direct trade routes with the East Indies.

It took the fleet much time to get from Africa to South America in the meantime many men died of scurvy. Admiral Mahu died on 23th September near Cape Verde islands. Gerrit Van Beuningen replaced Cordes on De Liefde who became admiral on the Hope.

In January 1599 the fleet crossed the Atlantic. The fleet wintered in the Fortesene Bay. Getting through the Straits of Magellan toke another 4 months. The fleet met again with problems getting through Straits of Magellan. Winter had begun and it was not before 3th of September 1599 they reached the Pacific. Again heavy storms scattered the fleet.

Disaster in Chile
De Liefde and De Hoop were separated from the rest of the fleet. They decided to wait at several rendez-vous points to refresh and wait for the rest of the fleet. 9th November they reached cabo Lavapie (Chile) landed to get supplies. They were fiercely attacked by Indians who thought they were Spanish. But through lack of supplies they had to negotiate with the Indians. The next day 23 crew members landed again, including vice admiral Van Beuningen were ambushed and killed while trying to get contact with the Indians. The disaster was complete and De Liefde set sail for the island of Santa Maria 1.5 miles from the coast. She was barely capable of sailing. Only 30 crew members survived. At the other side of the island to the joy of the men of De Liefde there was De Hoop anchoring there. De Hoop had met with a similar fate as De Liefde. She lost 26 men including admiral Cordes killed by Indians on the island La Mocha. 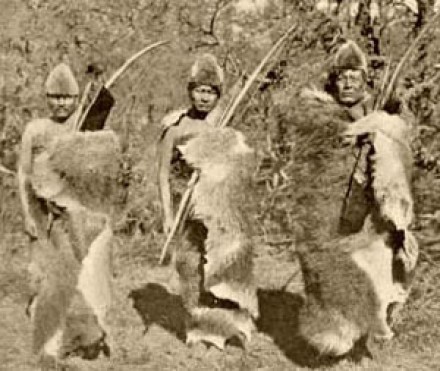 New master of De Liefde became Jacob Jansz. Quackernaeck. With barely enough men to sail the two ships it was decided to sail to Japan. One of the reasons to choose Japan was that part of the cargo consisted of eleven chests of coarse woolen cloth. The men thought the climate in Japan was better for trading wool than in the tropical East Indies itself. On the 27th of November supplied and ready they set sail for Japan. According to the letters of navigator Adams near the Marianen islands they lost sight of De Hoop on 24th February never to be seen again. On 24th March they reached Iwo Jima in Japanese waters. They reached Japan near Bungo (present-day Usuki) on the coast of Kyūshū in April 1600.

The surviving crew was captured and the ship plundered. 18 crew members survived and were released by the Japanese authorities. Civil war was waging in Japan at the time. The 18 Dutch cannons from the Liefde played a major role in the battle of Sekigahara (21th October 1600) between rivaling generals Ujusuki and Yeyasu. The battle was won by Yeyasu with help of the Dutch cannons from the Tokugawa clan. This formed the beginning of the Tokugawa shogunate. which lasted until 1868. 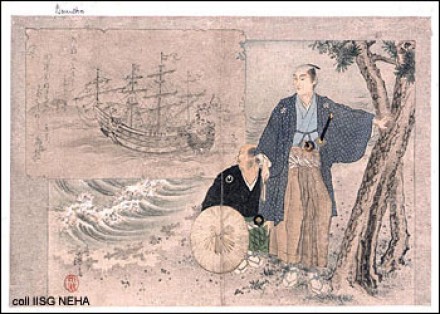 Soon after the establishment of the Tokugawa shogunate the Portuguese and the Jesuit monopoly was broken. Trade was taken over by other European nations English and the Dutch who had trading posts at first in Hirado.
Finally the Portuguese were expelled in 1639. From then on the only Europeans allowed in Japan were the Dutch. They had to settle on the small artificial island Dejima in the bay of Nagasaki. For more then 200 years Dejima was the only gateway between Japan and the rest of the world. 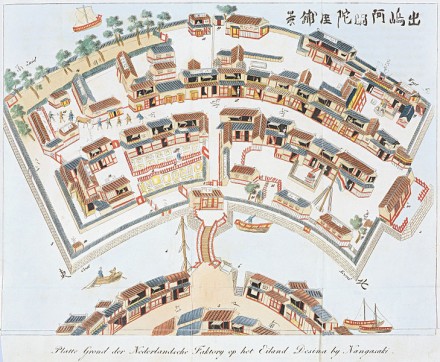 Ground-plan of the Dutch trade-post on the island Dejima at Nagasaki (Source : Koninklijke Bibliotheek NL).

Navigator William Adams
The navigator of De Liefde William Adams learned Japanees and became an important advisor for the (Shogun) Tokuguwa Yeyasu. At the time The Dutch arrived in Japan there was a civil war going on.

Until the arrival of De Liefde the Portuguese and especially the Jesuits order was very influential in Japan. They were spreading Catholicism and monopolized the trade with the outside world. Yeyasu was very interested in these other Europeans who had a different story and background as from the Portuguese.

Now the remains have today been formally identified on what is the 400th anniversary of the sailor's death in 1620, the Telegraph reported. The identification was made possible by painstaking forensic tests and research in both Japan and Britain.

Van Beuningen, vice-admiraal since 24-09-1598, aboard the LIEFDE was killed in S. Maria with 22 men and succeeded by Kwakernaak; the LIEFDE sailed via Hawaii and arrived in Japan 19-04-1600 with only 24/25 men. The Japanese confiscated the ship, but released the crew; later the ship was lost in Japanese waters. 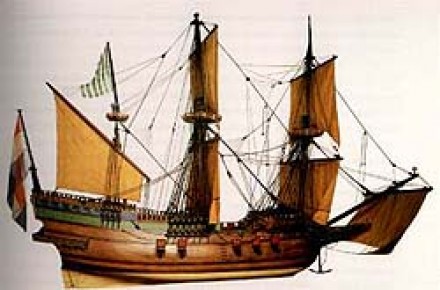 Model of the "Liefde". 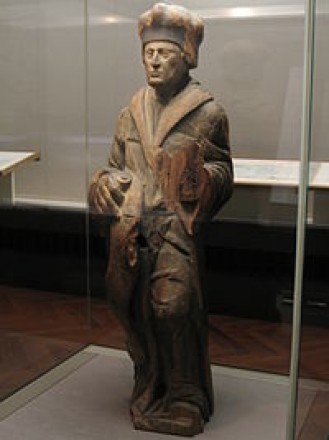 Erasmus
Originally De Liefde was called the Erasmus. On the stern there was a carving of the famous Rotterdam scholar Erasmus (1466-1536). At arrival in April the ship was plundered. Soon the authorities tried to regain the cargo. For centuries, the Erasmus carving was in a Japanese Temple, rediscovered in 1926, and now on display in the National Museum Tokyo.