The construction date of De Jonge Jacob is unknown; in fact, not much is known about this typical Dutch cargo ship until her final voyage in 1858. She was traveling from the Belgian city Tournai (in Dutch, Doornik) carrying stones to the Netherlands that would have been used as building materials. She sank on July 23, 1858, in Dordtsche Kil, a short river in the province of South Holland which forms the connection between the Oude Maas river and Hollands Diep.

De Jonge Jacob was captained on this voyage by Hendrik Ritmeester (1809-1902), who survived the wreck, although his eighty year old father drowned. It seems that Ritmeester was a very unsuccessful captain, as he lost three ships during his career, which led not only to the loss of his father but also the deaths of some of his children.

De Jonge Jacob has been excavated and raised, and is now on display at the Binnenvaartmuseum in Dordrecht. A range of different items were excavated along with the vessel, including such domestic items as a milk jug, cook pan, shards of dishes, and a tobacco box, as well as shipping materials like lifting blocks. The excavation raised some questions regarding the name of the vessel, and it is now questioned whether De Jonge Jacob is indeed correct. The stern name plate was found, but not the name plate for the bow. There were also at least five other vessels in the area named De Jonge Jacob at this time, and none of them can be connected to the 1858 Dordtsche Kil wreck. 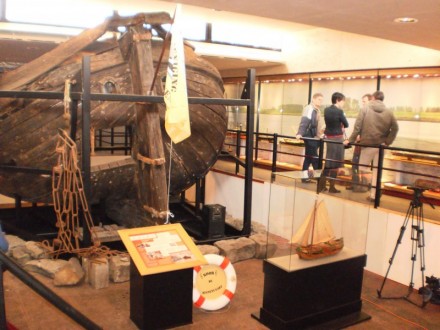 The stern of De Jonge Jacob on display, with the mysterious large square hatch. Photo by Hannie Visser-Kieboom.

De Jonge Jacob is a 19th century "hektjalk", which is a variation of the Dutch ship type "tjalk". The tjalk (pronounced "chalk")ship type is first mentioned in a Frisian document in 1673, and was a small boat used for cargo transportation in inland rivers. The traditional tjalk is rounded with a full bow, a flat bottom, and a shallow draft. It is constructed with a strong sloping inward bulwark, and a single mast with a fore and aft rig. On a hektjalk, a variation of the tjalk, the bulwark slopes up on either side of the stern, to meet and form a triangle above the tiller.

De Jonge Jacob has a unique feature: a large square hatch was found during excavation in the stern just above the waterline. It is presently unknown what the hatch was used for, although there is a theory that it was perhaps used to enable the transport of long logs. 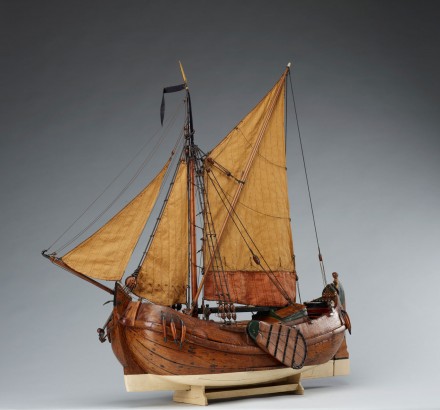 A model of an 18th century hektjalk.