The 44-gun Dutch warship Curacao was built for the Admiralty of Amsterdam at the city's naval dockyard Kattenburg in 1704. The ship thus began its service during the War of the Spanish Succession (1701-1714). In these years, the Dutch still had a strong navy, but its effective strength had already dropped far below that of its English allies. The size of the Dutch fleet fluctuated around 50 mostly small warships, such as the 44 (length) x 11.5 metre (beam) Curacao. As the Dutch Republic left the direct struggle for control of the seas to England, Dutch participation in the most notable sea battles was limited to its larger warships.

After the war, Curacao saw several small actions in the North Sea, the Atlantic and the Baltic. The ship's steady career was lengthened by repairs in 1721, after which it became one of four ships which regularly sailed to the Shetlands to escort the arriving Dutch East India Company (VOC) fleet from Java or Ceylon (so-called kruissendenschepen).

On 31 May 1729, Curacao was escorting such a fleet of eleven ships through the North Sea. Despite the calm weather, heavy fog and a contrary tide caused the ship to run aground off Unst. Local inhabitants witnessed the accident and were able to rescue 195 of the ship's crew of 200. The captain, named Raaije, was not held accountable for the disaster and would later command two more ships. Attempts at salvage made soon after the loss aimed to recover the cash, guns, cargo and other valuables.

In June 1972, a Franco-Belgian expedition under Robert Stenuit, which was primarily engaged in the investigation of the VOC ship Lastdrager near Unst, led to the discovery of another shipwreck. At the base of a rock known as Ship Stack and within three divergent gullies at depths of between 22 and 28 metres, Stenuit discovered some 40 cannons. After salvage and conservation of five of these in a later stage, the cannons were found to bear the mark of the Admiralty of Amsterdam, leading to the identification of the wreck as the Curacao.

The only remains of hull structure observed were a small portion of what was probably the forward stores-hold and more substantial (but unspecified) remains elsewhere. An anchor and chain, coils of (hemp) rope, copper and iron nails, lead sheet and copper strips were all found in the presumed hold, while navigational equipment found elsewhere comprised dividers and a sounding lead. 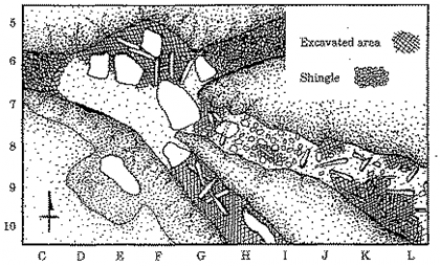 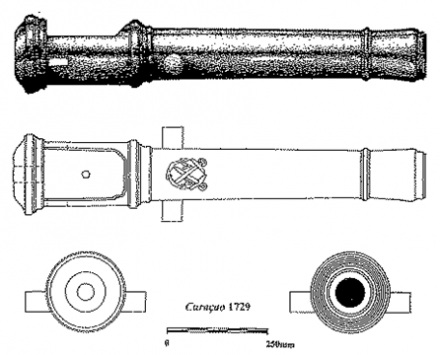 In December of the same year, a salvage contract was signed by the wreck's official owner, the Netherlands, and Stenuit proceeded with his investigation of the wreck. Items found scattered around the site included other pieces of the ship's armaments, such as round and lead shot, but also cooking and domestic items, such as various fragments of ceramic, copper and pewter vessels and utensils, as well as fragments of leather clothes.

Items of considerable financial value included the personal property of Curacao's officers and crew. A brass candlestick of unusual type, the remains of a copper tea kettle, fine copper buttons, fragments of clear glass stem, a copper tobacco pipe cover, a silver-gilt spoon, small pewter vessels, two brass coin-weights and a possible further weight were all identified. Fragments of clay tobacco pipes (some of them stamped) were common across the wreck, and a book found was identified as a treatise on etiquette.

As most of the items were sold at auction, the assemblage has never been subject to scientific study. However, a representative collection, including a 1-metre long bronze breech-loading gun bearing the mark of the Admiralty of Amsterdam that was recovered by a local diving club in 1997, has ended up in the collection of the Shetland Museum. 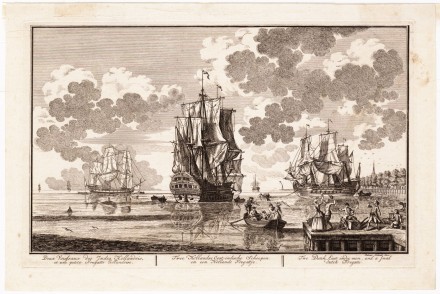 Involved institutions: Royal Commission on the Ancient and Historical Monuments of Scotland, Cultural Heritage Agency of the Netherlands.

Stenuit's salvage contract was renewed several times, until 1993, when ownership of Curacao fully returned to the Netherlands. As a site of cultural importance, the wreck also enjoys legal protection from the Royal Commission on the Ancient and Historical Monuments of Scotland. However, according to RCAHMS's database, Curacao was characterised as a dispersed and unstable maritime site already 1977.