In 1993 heavy wooden piles were found at the riverside of the Meuse, at Cuijk, known as Area 6000. These foundation piles are interpreted as part of a Roman quay, related to the Roman bridge (found in 1989), and the Late Roman castellum of Ceuclum, researched in several campaigns between 1937 and 1966.

During archaeological research in the centre of Cuijk, between 1937 and 1966, traces of a Roman presence were found. The nature of the remains is not clear, but there has been Roman occupation from at least 50 AD. The Roman site was probably in use until 100 AD. For the following 200 years, the Early Roman site was in use as a vicus. It was a regional centre, and a discovered Roman temple suggests religious importance. In the 4th century, under Constantine I (306-337 AD), a wooden castellum was built in more or less the same place as the Early Roman site. Under Valentinian I (364-375 AD) the castellum was rebuilt.

Archaeological research on the Roman quay

Since the discovery of the quay in 1993, 35 metres upstream from the Roman bridge, a total of 149 square cut piles have been discovered, with a layer of organic material in between. During a research campaign in 2009, 15 piles were, by accident, recovered and were later dated by dendrochronology. The piles are of oak wood and originate from the northern basin of the Meuse, possibly near Gennep, similar to the wood used for the Roman bridge. Of these piles, 120 piles were found in situ, vertically in the ground, and they have been identified as foundation piles. Of 28 piles, found horizontally, it was unclear whether they were used as foundation piles or as construction beams. Only one of the piles can be identified as a construction beam, due to the traces of modification on both sides. The recovered piles had a length of between 100 and 300 centimetres. None of the piles shows signs of pile shoes. 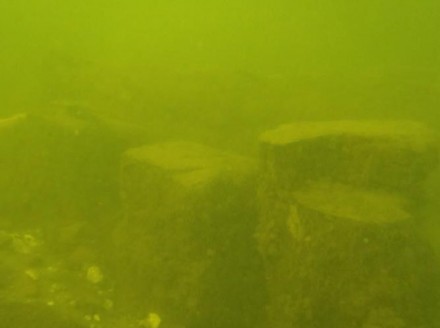 Several beams have been dated dendrochronologically. Four beams were sampled during the early research in the 1990s and provided dates of 309, 321, 358 and 373 AD. The piles recovered in 2009 were also dated by dendrochronology and gave two phases of tree felling, being 325-326 AD and 372-373 AD. The earlier dated piles roughly fit into these phases.

The layer of organic material consisted of a 70-centimetre thick peat-like material, with numerous finds from Roman times, like Roman pottery, leather, bones, glass, ash, coins, beads and building material. The organic material consisted primarily of wood chippings, sand, plant residue, gravel, charcoal and twigs. Two samples of the peat-like material gave a 14C dating of 130-330 AD and a piece of charcoal from the same layer gave the same date after 14C analysis. Roman pottery has a wide dating range from 50 AD until the first quarter of the 4th century.

The Roman authority probably left Ceuclum in the first quarter of the 5th century, probably in 406, after the Barbarian attacks from the south. 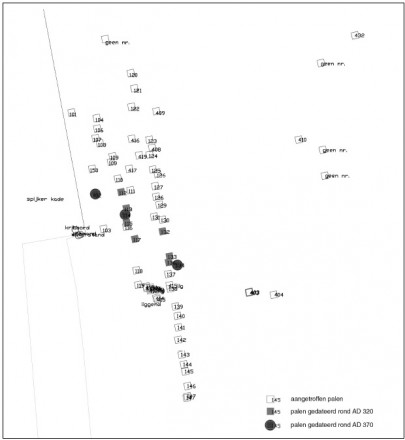 The beams of the Roman quay, Cuijk.

The Roman quay at Cuijk was a wooden quay, resting on heavy wooden foundation beams. It was located on the riverside of the Meuse at a close distance from the Roman bridge and the Late Roman castellum, at Cuijk.

Area 6000 is a site of high archaeological value and is partly a protected archaeological monument (Monument number: 524076). In 2006 the monument was covered for protection, with a layer of geotextile, a layer of clay and a top layer of polypropylene netting and galvanized wire netting, secured with stakes and sandbags. A year later a ship heavily damaged the top layer of the covering. Due to the propelling force of ships, the protective cover has been heavily damaged. The stakes are pulled out of the ground, the layer of geotextile is torn loose and partly missing and the layer of clay is almost entirely gone. The stratigraphy of the site is most likely disturbed by the ship propellers and mixed with the layer of recent clay. 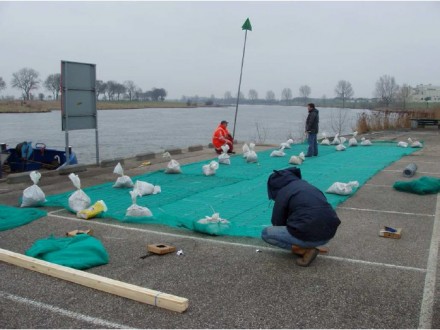 From the 28 August 2013 until 7 September 2013 an assessment research project was undertaken by the Maritime Program of the Cultural Heritage Agency of the Netherlands. Plans of the municipality of Cuijk to renovate the modern quay will have a big influence on the remains of the Roman quay. The assessment research needs to determine whether the sheet pile walls can be driven into the riverbed without damaging the archaeological remains, or if an archaeological excavation is needed. Several dives showed most of the piles are not covered by the netting anymore and have been splintered on the top or have been moved due to collisions with ships. The site is, in the condition, it is in now, no longer protected and is now vulnerable to outside influences. To investigate the status of the monument, the protective layer has to be removed. The Cultural Heritage Agency of the Netherlands recommends a small excavation to secure the missing information of the site before the site deteriorates any further. 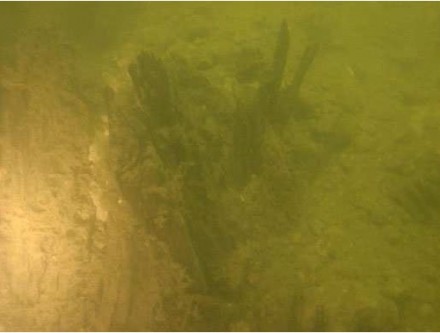 A splintered pile from the Roman quay, Cuijk.