Burgzand Noord 8 (BZN 8) is the wreck of a 17th-century armed merchantman. It was long thought to be the remnants of the VOC galliot the Lelie. However, this has turned out to be incorrect.

The wreck site was discovered in 1997 and physically protected in 2003. The first multibeam recording made on this site was in 2003. The wreck is ca. 20 m wide and 30 m long. The maximum height differences inside and outside the wreck were 3.5 to 4 m in 2009. At this time, on the southwest side, sharp edges had formed around the polypropylene protection nets. Before the physical protection was put in place, the stern area to the south was the most protruding feature. Strong erosion here posed a major threat to the entire site.

In 2004, the protective layer was clearly catching sand and most height differences in the wreck had levelled out. However, some single uncovered ship parts were being revealed in the southeast and northwest areas. East of the wreck mound a large but shallow erosion pit ca. 4 by 8 m was becoming visible in the middle of the wreck. East of the wreck mound, in the north and south regions more sand had been deposited on the wreck site. On the west side the edges of the protection nets were covered with sand. The erosion pit in the east had been deepened in 2008, and this continued in 2009. Inside the wreck, the mound was levelling out due to sediment build up.

From 1850 until around 1950, the wreck area eroded by approximately 3 m, after which sedimentation took over. However, from 1980 onwards, the area stated to erode again, by another 4 m. Since 2003, when the protection measures were put in place, the wreck mound has hardly changed, while the surrounding area has further eroded. 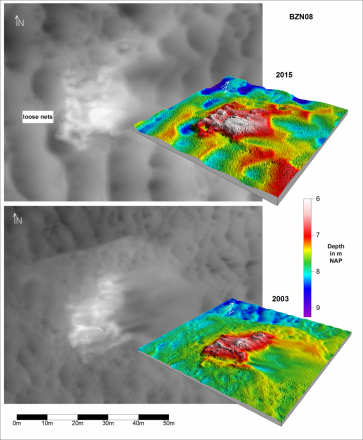