The first multibeam recording of the Burgzand Noord 16 (BZN 16) wreck (a seventeenth/eighteenth-century shipwreck) area was made in 2011. Wooden wreck parts were reported by government archaeologists in 2002. In the 2011 recording, however, no evidence of any shipwreck was found in a radius of 50 metres from the reported location. This may be because the location was not accurately recorded or the wreck parts had eroded and washed away. The latter is a plausible explanation as the area had deepened by 2 metres since the first report of a wreck. 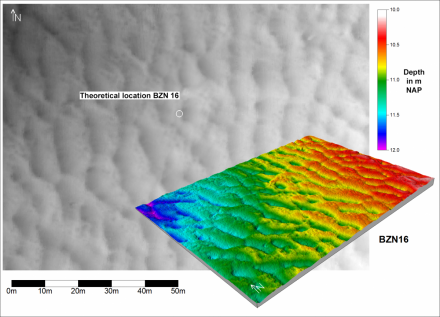