The Burgzand Noord 15 (BZN 15) wreck site was first assessed in 1999. It consisted of partly disarticulated ship parts and cargo. The most protruding element was a cargo of iron rods. The wreck was dated to the seventeenth century, and was recorded with multibeam for the first time in October 2012. A comparison with the recordings in 2013 and 2014 revealed various long objects (one even as long as 4 metres) to the south of the earlier recorded iron rods. The area itself is deepening, which is also apparent in the recording from 2015 (although the resolution of this recording is considerably lower than those made previously). 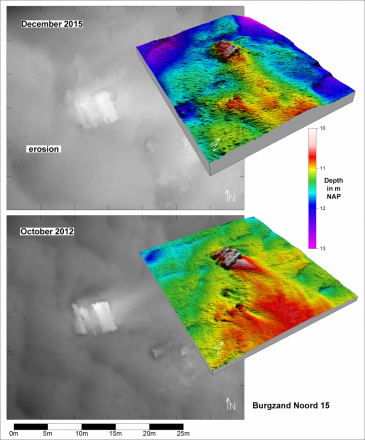