The wreck was discovered in 1997 and researched in 2002 and 2007. After 2002, it was decided that this site should be left unprotected, as a reference or benchmark for the other wrecks in the area. 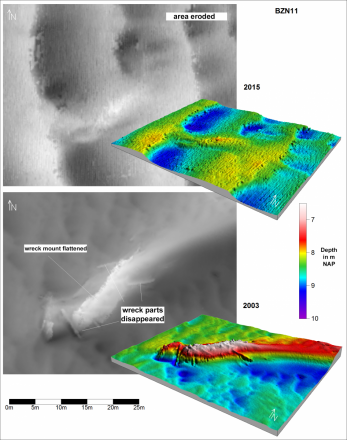 Compilation of BZN 11 erosion-sedimentation history. (A) Two multibeam recordings from 2003 and 2015 compared. (B) Burial history of the wreck site (figure courtesy Periplus Archeomare/RCE).

In 2003, the site consisted of a large wreck section, 25 m long by 8 m wide, surrounded by loose wreck parts. There was a strong erosion gully on the south side of the wreck. The length remained the same, but a large ridge, which was at least 50 m long, was forming to the east. From 2004, the deep erosion gully levelled out. This was still the case in 2006, but in the southwest some strong erosion pits seemed to be undermining the ship construction. In 2008 and 2009, the site was still as large as in 2004, but the seabed around it had flattened out further.

In general, the wreck appears to be slowly disappearing, probably because it is falling apart. Evidence of this can also be found in the multibeam data. While in 2003 the height difference between the wreck and the surrounding seabed was still approximately 1.4 m, in 2009 the wreck only protruded 10 cm above the seabed. In 2013 these loose parts and the wreck mound had completely disappeared. The whole area had flattened out, and most of the objects above the seabed (causing eddy currents) had disappeared.

The historical and more recent data show that from 1852 onwards the wreck would have eroded gradually, and since its discovery in 1997 this process of erosion accelerated, deepening the site by 6 m in total.