In 1759, the Burg (sometimes mentioned as Burch or Burgh) slipped of the ramp of a shipyard in Middelburg, Zeeland. Commissioned by the Chamber of Zeeland of the Dutch East India Company (VOC), the Burgmade several voyages to the East. On three occasions she was to sail via Batavia to Dejima. Her journeys to Dejima were met with great peril, as on two out of three journeys she was heavily damaged by strong gales. She made her final journey in 1772, when she and Margaretha Mariawere to sail from Batavia to Dejima.Nearing the Danjo-gunto Islands*, both vessels were caught in a typhoon. During the storm, the Burg lost among other parts her masts, bowsprit, head and quarter-galleries. She sprung a leak, allowing water to built up in the powder-room and hold (Thunberg 1796, p.10). Fearing for their lives, the crew - including M. Daniel Armenault, new Chief of the Dutch trading post on Dejima - transferred to the Margaretha Maria.Expecting the ship to sink, the Dutch left the unmannedBurgbehind andcontinued their journey to Dejima, Japan.

* Known in most contemporary Dutch reports as the Maximaislands, a phonetic corruption of the actual name of the island's group most prominent island which is named Me Shima in Japanese. This island group was used by sailors to determine their position, knowing that by passing Me Shima, they were finally in Japanese waters. 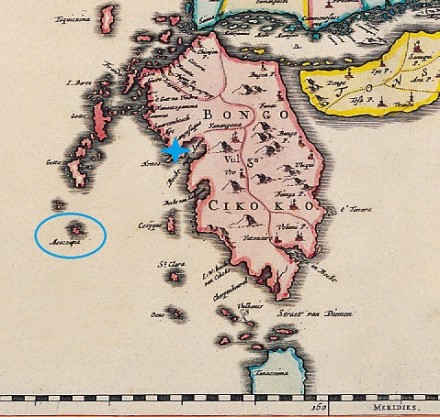 Me Shima (encircled in blue) and the other Danjo-Gunto Islands as depicted on an old map of Japan, the blue star represents Nagasaki.

The wreck that did not sink...

Meanwhile, the Burg refused to sink, while she slowly drifted towards the shores of Satsuma in South-West Japan. TheBurgwas found by the Japanese and then towed to Nagasaki, where the vessel was carefully examined and dismantled by local authorities. During the meticulous dismantling process, large quantity of forbidden goods were brought to light, including a chest full of ginseng root thatbelonged to Dutch chief Daniel Armenault. Ginseng root at the timewasby no means to be imported into Japan and the Japanese outrage only grew.In response to the smuggling goods found, Japanese authorities increased their already stringent inspections of every incoming Dutch ship in the subsequent years to come.

Eventually, the hull was all that remained of the stripped downBurg. It was later sold in Nagasaki for scrap in 1773.

Built: 1759 in Middelburg, Zeeland (the Netherlands) 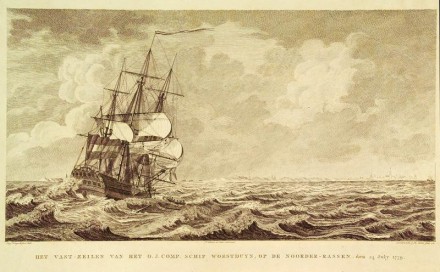 The ship the Woestduyn before shipwrecking (1779) (not the ship in the story).