The warshipBrederode was built for the Admiralty of Rotterdam (the Netherlands) between 1643 and 1644. With 59 pieces of cannon on board instead of the usual 20 to 40, and a length of 132 Rotterdam feet (about 122 ft), the Brederode and its sister ship Aemilia were the largest warships of the Dutch fleet. Not surprisingly, the ship was intended for one of the most famous Dutch naval officers of the 17th century: Witte Corneliszoon de With (1599-1658).

However, Brederode saw its first major action under the command of Maarten Harpertszoon Tromp, during the First Anglo-Dutch War (1652-1653). At the Battle of the Gabbard, Brederode was boarded by the English, and Tromp desperately detonated the ship's gunpowder barrels, blowing up the entire deck of the ship along withthe enemy. After two months of repairs, the ship was ready to take part in the Battle of Scheveningen, during which its commander was killed in action. On April 8, 1653, command of the Brederode was returned to De With. 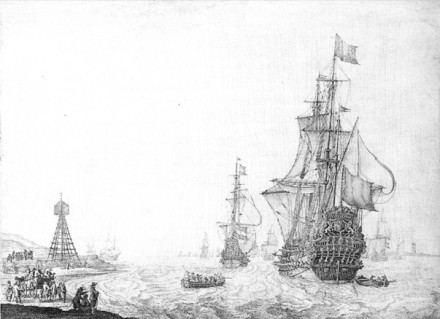 The Brederode off Vlieland. Pen painting by Willem van de Velde the Elder (1611-1693)

In 1658 the Dutch States-General dispatched a fleet of 35 vessels to aid the Danes in their defense against Sweden. During the Battle of the Sound, the Brederode and its larger successor Eendracht succeeded in incapacitating the Swedish flagship Victoria, but soon afterwards De With found his ship stranded by the strong current. Brederode was boarded by the Swedes, and the Dutch vice-admiral was mortally wounded. Having captured the ship and its crew, the Swedes attempted to save the vessel, but failed. The Brederode sank off the Danish village of Snekkersten after twelve years of active service, and its commander Witte de With died shortly afterwards. 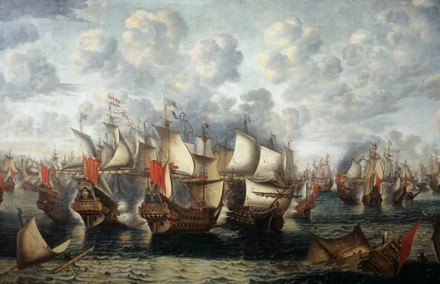 The first phase of the Battle of the Sound. Painting by Jan Abrahamsz. Beerstraaten (1660)

The precise circumstances under which the wreck of the Brederode was (re)located and identified at the beginning of the 20th century are unclear. Perhaps the location had always been known among the locals of Snekkersten, as in 1660 26 pieces of cannon were lifted from the shipwreck. The only certainty is that in 1909, a local fisherman P. Hansen was ordered by the Danish government to investigate several wrecks off the coast of Snekkersten. He was able to salvage three cannon and a collection of pottery and other finds from the shipwreck, indentifying it as the Brederode. The finds certainly match up with a mid-17th century Dutch warship, and as the Brederode is the only Dutch ship known to have sunk in this part of the Sound, the identification still stands. Two bronze cannon were sold at a local market, never to be seen again, but an iron cannon was given to the Netherlands along with several smaller objects from the shipwreck. 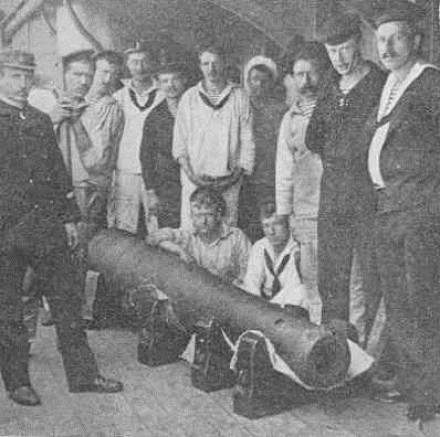 The 3750 pound iron cannon while being shipped to the Netherlands in 1909. It can now be found in the city hall of Brielle. (Nederlands Militair Museum). 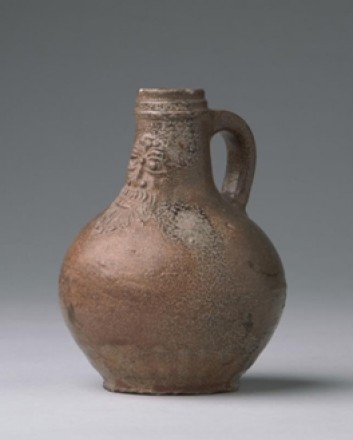 Several pieces of pottery found at the wreck site in 1909, such as this Bartmann jug, ended up in the collection of the Scheepvaartmuseum in Amsterdam.

The shipwreck was forgotten about for several decades, until in 1954 Dutch ex-naval officer Dick Luiting's interest turned to the Brederode. The news that he had contacted a Snekkersten military diver named Jan Uhre to discuss bringing Witte de With's ship to the surface prompted a real hype in Dutch magazines. However, Luiting's plan turned out not to be thought through very well, and after talks between the Dutch and Danish authorities, they were overtaken. The Danish government now officially granted the Netherlands permission to salvage the wreck, and the Maritime Museum in Rotterdam was appointed as the beneficiary.

Diver Jan Uhre was then hired by the Maritime Museum to carry out an exploratory investigation into the possibilities for salvage. The work was to be overseen by pioneering Dutch ship archaeologist Gerrit van der Heide (1915-2006), whose short preliminary report of the 1955 campaign is currently the only source of information available on the wreck of the Brederode.

The wreck, lying on its keel at a depth of around 9 meters, at a slightly different location than the 1909 report indicates, turned out to be in relatively good condition. Parts of the ship's oak wood construction, thought to be of the front end of the ship, could be seen covering an area of about 30 meters. Although the directly visible wood was heavily damaged by shipworm, the removal of sediment revealed some of the more intact parts of the ship to a depth of 2 meters beneath the sea floor. A piece of wood, thought to be a ship's timber, was brought to the surface for analysis and showed signs of fire damage, consistent with the Brederode story. 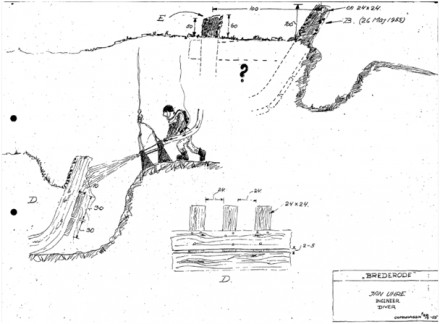 Drawing made by Jan Uhre, showing the technique used for removing sediment from the wreck (RCE). 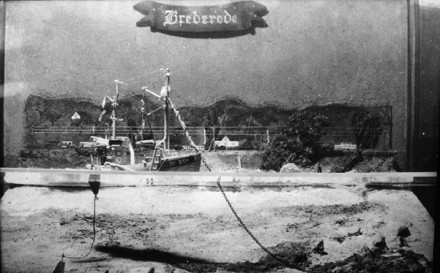 Between July and September 1955, an exhibition on the Brederode was held at the Maritime Museum. Besides earlier finds from the wreck, a miniature model of the wreck site made by Jan Uhre was on display (Maritime Museum Rotterdam).

Brederode was the flagship of the famous Dutch naval officer Witte Cornelisz. de With. It sank as a result of the Battle of the Sound on 8 November, 1658. In the 1950s, plans were made to lift the wreck from the seabed, but were never followed through. 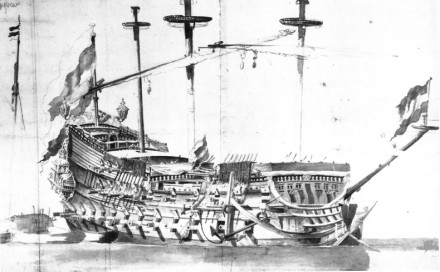 Portrait of the Brederode by Peter van de Velde the Elder (ca. 1658).

At the end of the 1955 campaign, Van der Heide concluded that salvage of the Brederode, despite the obvious difficulties with the preservation of the ship, was achievable within budget. The plans were however never followed through. Today, the shipwreck is listed as a protected cultural heritage site by the Danish Agency for Culture. No further archaeological research or documentation has taken place at the wreck site since the 1950s, and so Witte de With's ship is yet to reveal its secrets. 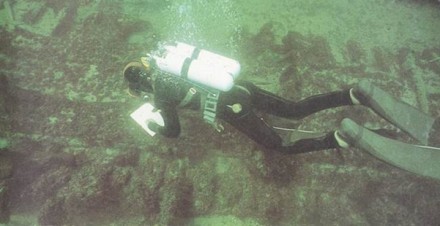 Although the Brederode's current status is uknown, the wreck does appear in the Danish Agency for Culture's list of maritime heritage sites. This picture is rumoured to have been taken at the Brederode wreck site (Syddansk Universitetsbibliotek Esbjerg).