The remains of the forward half of the ship and the extreme aft timbers were excavated. The forward half was destroyed during the modern construction work. The aft half remains unexcavated.

The wreck comprised the bottom and parts of the collapsed sides of a Romano-Celtic ship. The vessel was built of oak (Quercus) and had no keel, but instead two broad keel-planks.

A stem post lay at the bow and a stern post at the stern. The planks were carvel laid and fastened by large iron nails to oak frames - massive floor-timbers in the bottom, and lighter side-frames at the sides. The bottom nails had partly cone-shaped heads hollowed to contain a caulking of thin slivers of hazel (Corylus avellana) in pine resin, and the sides had fully cone-shaped heads similarly caulked. The pointed ends of all nails had been turned over the inboard face of the frames (clenched).Between the strakes was a caulking of hazel (Corylus avellana) shavings in a pine resin.

The mast-step was a rectangular socket in a transverse floor-timber about one-third of the length of the vessel from the bow, and in the bottom of the step was a votive offering of a worn bronze coin of Domitian that had been minted in Rome in AD 88-89. The construction of the ship was dated to about AD 150 by dendrochronology, and its sinking soon after dated by associated pottery and a coin. 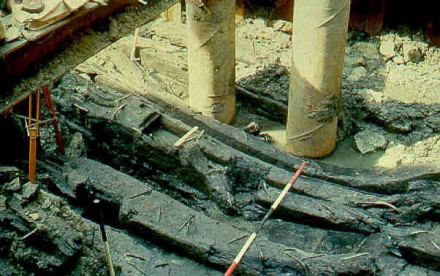 The wreck was carrying a cargo of building stone bythe rivers Medway and Thames from the Maidstone area of Kent, south-east England, to London. Forward of the mast-step in the bottom was an unfinished millstone of Millstone Grit, probably either from the Pennine Hills of northern England or, more likely, from the Namur region by the river Meuse in Belgium.

The ship had certainly sailed at sea for traces of Teredo and Limnoria borings existed in the planks. It appears to have sunk by accident in a collision. 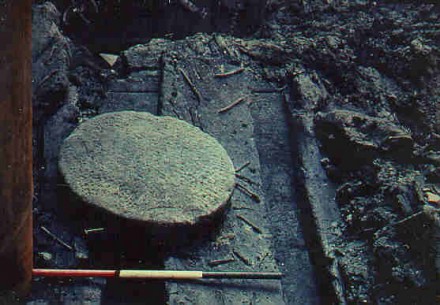 The Blackfriars 1 was built frame-first, meaning that the frame of the ship was built before building the rest of the ship. This method was much faster, saved wood, and was advanced for the period. Enough remained to reconstruct the sides up to over 2.5m above the bottom, and this enabled a hydrostatic analysis to be undertaken. This showed that the vessel could probably carry a cargo of about 50 tonnes at a draught of about 1.5 m.

The hold is positioned in the middle of the ship and was lined with a ceiling of oak planks. 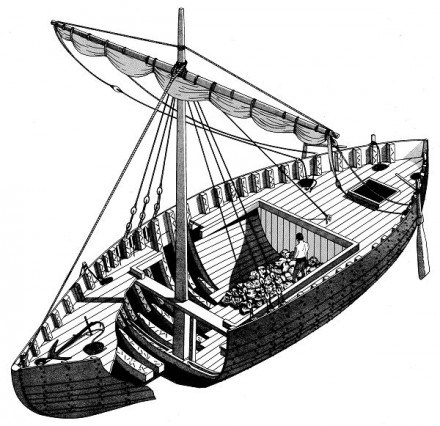 Impression of the ship.

The Roman ship was discovered by Peter Marsden in 1962 in the bed of the River Thames, off Blackfriars in the City of London, and excavated in 1962-1963. The ship was a wreck that lay about 120 metres from the Roman shore at the south -west corner of the Roman city of Londinium. The remains of the forward half of the ship and the extreme aft timbers were excavated. The forward half was destroyed during the modern construction work. The aft half remains unexcavated. Some timbers are preserved at the Shipwreck Heritage Centre, Hastings, and in the Museum of London, England. 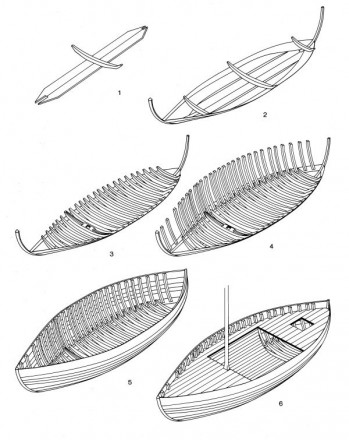