The first submarine Adam was built in February 1944 and was copied from a captured British Welman midget submarine. In September 2009 a rear part of a Biber was found on the river beach near Gendt. The submarine was stationed at the German city of Emmerich near the German Dutch border and destroyed near Gendt some kilometers downstream. This Biber was used probably in January or February 1945 to attack the bridge near Nijmegen. The Biber is excavated and now on display in the National Liberation Museum Groesbeek.

On the 29th of August 1944, 18 Bibers where put in action against allied supply vessels in the allied invasion fleet near Normandy. Later they where transferred to Holland in Scheldt Estuary. In all 324 Bibers were built, success was very limited. In Emmerich 5 Bibers were stationed in January and February 1945 to attack the bridge near Nijmegen. 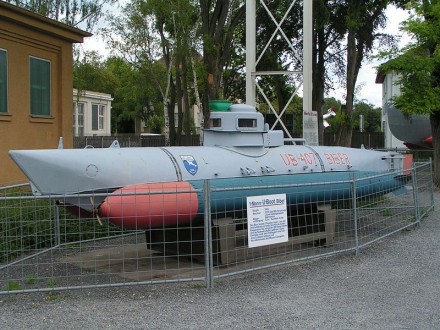 Operation Market garden began at 17th September 1944 garden with biggest air operation ever to conquered the Rhine and Waal bridges by Nijmegen and Arnhem and so push into Germany to end the war failed. As a result the front line was for months fixed (between September 1944 and February 1945) along the Rhine and Waal in The Netherlands. In this period the two bridges (train and traffic) at Nijmegen were target of the Germans. The Germans desperately tried to destroy the bridges in an attempt to hinder the allied push into Germany.

On 13th January 1945 a Biber attack was planned to destroy the bridge at Nijmegen.

Severel U-boats were attempts to place explosives were made by several Bibers. Defensive against such attacks was relatively easy done by placing (iron) nets (Abwehrnetzen) in the river Waal. At least 8 submarines were damaged and the crew was killed. The Biber wreck found in Gendt was one of these submarines that was destroyed during this attack.

Biber a midget submarine. The smallest in the German navy.
Built in Lubeck. 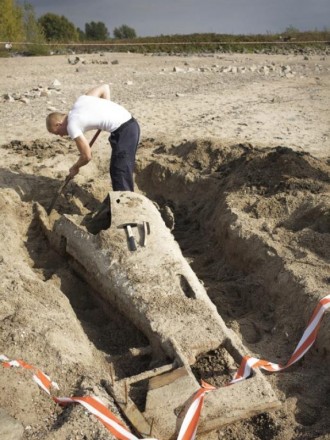 The remains of a Biber in Gendt (foto William Moore).