The island off the north coast of South-America known today as Tobago, was first colonized by the Dutch West India Company in 1628. Nieuw Walcheren, as they called it, provided the Dutch with an abundance of local products, such as sugar, rum and cacao. The island would play an important role in the trans-Atlantic slave trade for several years.

After the second and third Anglo-Dutch wars of 1665-1667 and 1672-1674, during which the island temporarily fell to buccaneers and to the British, the colony was left devastated, and had to be resettled. The arrival of 500 new colonists on the island in June 1676 and the building of the Sterreschans fortress would, however, not restore Dutch control overNieuw Walcheren for long, as a former ally to the British - France - had also set its eye on the island. 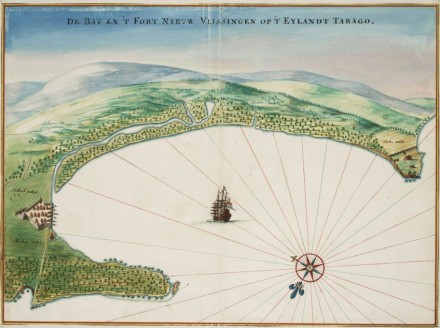 The bay of Nieuw Vlissingen (Scarborough, Tobago) as depicted by Johannes Vingboons, 1665.

On March 3rd 1677 the French fleet, under command of Vice Admiral Jean II Comted'Estrees, launched an attack on Nieuw Vlissingen, the main settlement on the island, now named Scarborough. After an initial failed attempt to take the Sterreschans overland, d'Estrees decided on a final two-pronged attack from both sea and land. Both sides suffered severe losses: the French lost five of their vessels, including their flagship Le Glorieux, and around a thousand men. The Dutch lost ten of their ships (see table below), but managed to repel the attack, only to suffer a final defeat in December the same year. 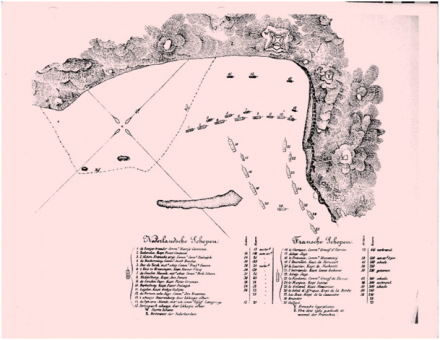 Map of the Battle of Scarborough, 1677. The French fleet is approaching from the East.

In 1991, during large scale dredging operations in Scarborough harbour, rumours were that many ship's timbers, bottles, clay pipes and coin, were being found at the site. When someone was caught while trying to smuggle a bronze cannon, thought to be from the French flagship Le Glorieux, through the port, the authorities stepped in to protect the remains of the 1677 battle. In the mid 1990's, a magnetometer survey and limited excavations at the site revealed the location of several shipwrecks. Based on the known positions of the ships during the battle, it is likely that those vessels were Dutch. 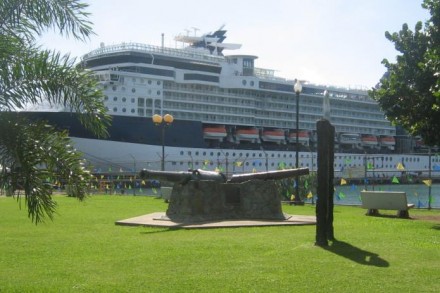 Of the cannon that were dredged up in 1990, a French Bronze 24 pounder and a Dutch iron 18 pounder, have been placed on display in Scarborough Harbour.

Within the scope of the Tobago 1677 Shipwreck Project, led by Kroum Batchvarov of the University of Connecticut, preliminary investigations were carried out in 2012. A first systematic investigation of the wrecks will be conducted in 2013. As of now, five wrecks have been investigated, and promise not only to reveal important information about the course of the naval battle at Tobago in 1677 and its consequences, but also to expand our understanding of the technology, economy and environment of the 17th century. Also, project aims to aid Trinidad & Tobago in the protection of underwater heritage by establishing conservation facilities on the island and to provide educational opportunities to local students.

Present Scarborough (Dutch: Nieuw Vlissingen) bay was the site of two naval battles that were fought in 1677 between the Dutch and French fleets. Some of the ships that were lost by the Dutch may have been located recently. 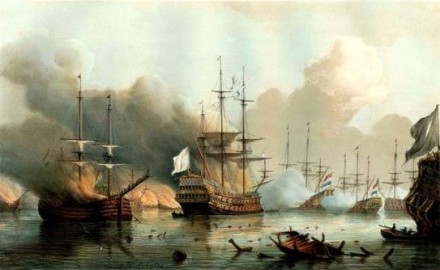 Fictional depiction of the first battle of Tobago, from Heldendaden der Nederlanders ter Zee, a collection of lithographs by Petrus Johannes Schotel (1808-1865)