The maiden voyage of Batavia ended in disaster after she left for Batavia in the Dutch East Indies on October 29, 1628. The skipper was Adriaen Jacobsz, but the overall commander (commandeur), a title which designates the senior VOC officer onboard, was senior merchant Frans Pelsaert. During the voyage, part of the crew sought to mutiny and take over the ship, and it seems that the skipper may also have been involved. The mutiny failed, and Batavia struck a reef on June 4, 1628, some 60 km off the coast of West Australia (Beacon Island).

Most of the crew and passengers, 322 individuals, got off the ship and made camp on some small islands. Skipper Jacobsz, merchant Pelsaert, 40 officers, some crew members and passengers, left the wreck site in a longboat heading north in search of Batavia (Djakarta) and help. It took them 33 days to reach Batavia. Pelsaert got a ship, the Zaandam (Saerdam), to rescue the other survivors. He arrived at the islands 2 months after leaving Batavia, only to discover that another bloody mutiny had taken place amongst those left behind, reducing their numbers by at least a hundred. 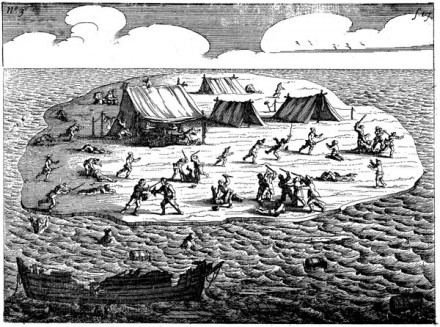 Jeronimus Cornelisz, the second merchant who had been left in charge of the survivors, was well aware that if the rescue party ever reached Batavia, he would be accused of mutiny and sentenced to hanging. He therefore made plans to hijack any rescue ship that might return and use the vessel to escape. Cornelisz even made plans to start a new kingdom, using the gold and silver from the wrecked Batavia. However, to carry out this plan, he first needed to eliminate possible opponents. He sent soldiers led by Wiebe Hayes to another island to search for fresh water and left them there to die. A reign of terror among the survivors began. Cornelisz and a gang of murderers killed everyone who opposed them – men, women and children alike. Cornelisz never committed any of the murders himself. Instead, he used others to kill for him, first under the pretext that the victim had committed a crime such as theft, but eventually the mutineers began to kill just for the sake of killing. He planned to reduce the island's population to around 45, so that their supplies would last as long as possible. By the time it was over, he and his followers had murdered at least 110 of the survivors.

The soldiers that had been left to die on a neighbouring island did not perish. When Pelsaert returned with help, a race to the rescue ship ensued between Cornelisz's men and the neighbouring soldiers. Wiebbe Hayes and his soldiers reached the ship first, and were able to present their side of the story to Pelsaert. After a short battle, the combined force captured all of the mutineers. Pelsaert decided to conduct a trial on the islands, as otherwise the Zaandam would have been overcrowded with survivors and prisoners on the return voyage to Batavia. After a brief trial, the worst offenders were executed. Cornelisz and several of the main mutineers had both hands chopped off before being hanged.

The remaining mutineers were taken to Batavia for trial. Five were hanged. Skipper Jacobsz, despite being tortured, did not confess to his part in planning the mutiny and escaped execution due to lack of evidence. What finally became of him is unknown, but it is suspected that he died in prison in Batavia. A VOC board of inquiry decided that Pelsaert had exercised a lack of authority and was therefore partly responsible for what had happened. The soldier Wiebbe Hayes was hailed a hero and promoted.

Of the original 341 people on board Batavia, 117 survived the voyage.* 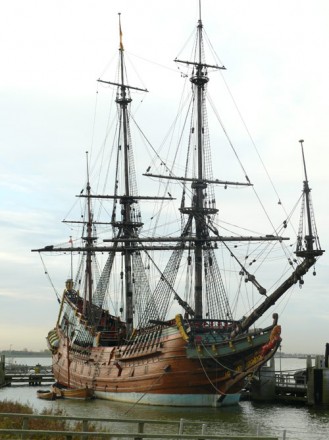 A replica of the Batavia was built by master carpenter Willem Vos in Lelystad, the Netherlands between 1985-‘95. The Batavia replica was built with traditional materials, and wood such as oak and hemp. The tools used were also as traditional as possible.

For the design of the replica, the remains of the original ship in Fremantle together with the Vasa were used, as well as 17th-century building descriptions (actual building plans were not made at the time), and prints and paintings (artists, at the time, generally painted fairly true to nature) of similar ships.

On September 25, 1999, the new Batavia was transported to Australia where she was the flagship for the Dutch Olympic team in 2000. On June 12, 2001, the ship returned to the Bataviawerf in Lelystad, where it remains on display to visitors.