From March to July 1943, the so-called 'Battle of The Ruhr' is held, a campaign of strategic bombing. The Ruhr area in Germany is bombed by the American USAAF during the day and by the British RAF at night. The fourth air raid on Duisburg took place in the night of 12-13 May 1943. A fleet of 572 bombers departs from various bases in England around midnight to bomb Germany's largest Rhine port and important industrial city.

Last flight
The Lancaster Mk. I W4762 with 8 crew members on board is shot down from the air on its way back to home base at 5600 meters altitude by night fighter (Ltn. Robert Dentzel and Uffz. Rudi Dunger) of the command night fighters 12./NJG1, which is stationed at Leeuwarden.
At 1.38 am the aircraft will crash 6 km north-west of Nijkerk into the IJsselmeer. The crew is killed.

The Lancaster crew this night flew their 29th operation, the penultimate of their operational tour. After that they would get half a year less dangerous work. They had a passenger on board for this flight. F / O Geoffrey Douglas Priestley, an RAF briefing officer, wanted to experience something firsthand. 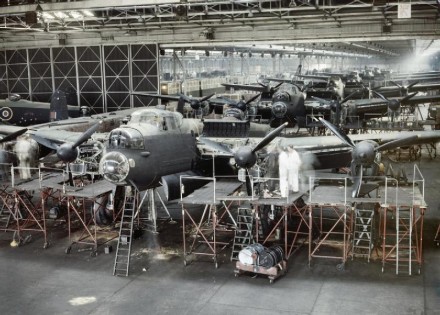