Originally an English ship named John and Thomas. She was was bought by the English East India Company in 1641, renamed Blessing . The Blessing traveled several times to Asia from England. The ship was captured by the Dutch during the First Anglo Dutch War (1652-1654) near Persia.

[...] the astonishment of the Persians, who wonder 'what is become of the English vallour'. To this the only reply possible is that the ships were taken unawares and were so pertered with merchants and their goods that thye were not able to make a stout resistance. [...] The disgrace of seeing their vessels thus taken by two or three rotten Dutch ships 'is so much that we are ashamed to show ourselves...' ¹

Home bound
The Blessing , renamed Avondster was assigned to VOC chamber Hoorn. the return fleet. The home fleet departed 14-1-1654 for its journey to the Netherlands. On 29-8-1654 the yacht was in Hoorn.

Japan
The Evening Star left Texel again on 13-3-1655 and arrived in Batavia via Table Bay on 1-10. The yacht was then used to take 50 soldiers and other supplies to Amboina and from there quickly sent back to Batavia as it was destined for the "Nordic voyage" to Taiwan and Japan.
The precious cargo with which the ship departed from Batavia to Japan on 11-7-1656 also contained two “extraordinary large globuses” and a “partye geometric instruments” as a gift for the emperor of Japan.

Home bound voyage canceled
After returning from Japan, the yacht was again destined for a return trip to the Netherlands. Once out of Sunda Strait, the Evening Star was found to be leaking too much to sustain that long journey. The cargo was divided among the other ships of the fleet and the Evening Star returned to Batavia.

Service in India and Ceylon
The yacht was still considered suitable for use in 1657 for the blockade of Bantam. In August 1657 she was assigned to the fleet that left for Goa and Ceylon under van Goens. There was quite a bit of criticism of the Evening Star's sailing performance during the voyage to Goa. There it was decided that the ship was better suited as a transport ship for troops and materials than as a war yacht.

Mannar
In February 1658, the Avondster was involved in the blockade and capture of the Portuguese fortress on the island of Mannar. Mannar was strategically located and controlled the waterway between India and Ceylon. It was one of the last Portuguese settlements in Ceylon.

Areka nuts
In May 1659, the Avondster arrived in Gale Sri Lanka. She would have to load there areka nuts (betel nuts). The end of the areka nut harvest had not yet come. And the nuts must then be processed into chewable products. The Avondster had to wait. The areka nut was an important ingredient of the .* The VOC tried to obtain a monopoly position in the export of areka nuts.

On July 2, 1659, Avondster was anchored near Black Fort Gale in Ceylon, modern day Sri Lanka, and her crew was loading a cargo of areca nuts, when she sank. Although the weather was fine, sometime during the night, she slipped her anchor and hit the shore, at which point she broke in two and was soon submerged in the soft sands of the beach. Dutch records show that a sailor on deck noticed that she was drifting, and tried to wake the captain. The captain was unfortunately too slow, and by the time he gave orders to throw out the warp anchor, it was too late, and Avondster was lost. The captain and first mate were arrested by the Dutch authorities, found at fault for the wreck, and made to pay for the losses of the ship and cargo.

The wreck site of Avondster was discovered and studied in the 1990's.

In 2001 a Maritime Archaeology Unit (MAU) was formed under the Mutual Heritage Centre and managed by the Central Cultural Fund, a Sri Lankan Government agency. The MAU’s first major project was the excavation of the Avondster, one of five Dutch East Indiamen wrecked in the bay area.¹

She lies about 50 meters from the beach, under 4-7 meters of water, and has been the subject of continual excavation since the beginning of the project in 2000.

Archaeological sites in the bay of Galle. Site L is the site of The Avondster. ( from The Anglo-Dutch East-Indiaman that was wrecked twice in Ceylon. )

The wreck of Avondster provides information in many areas of historical research, including repairing customs of ships in Asia, the material culture of a maritime community, regional Asian trade, among others. The wreck site itself is quite well preserved, and it is unusual to find sites that are so complete in tropical waters. Among many other items, yellow bricks were found on the wreck, which is often the first identifier of a Dutch shipwreck. These bricks were used as ballast, and often recycled in buildings in Dutch colonies, where they can sometimes still be seen today.

A human skull was also found on the wreck, even though there were no reported casualties at the time of the wreckage. This may be the result of an early attempt at salvage. Much work has been done since the beginning of the project in 2000, and a great deal of the site was excavated. Unfortunately, this turned out to be damaging to the remains, as Sri Lanka was among the areas greatly affected by the 2004 Indian Ocean earthquake and tsunami. While the artifacts remaining on the ocean floor survived quite well, as they were covered by a protective layer of sand by the tsunami, the artifacts that had been transported to the nearby lab were lost, and the project had to begin again nearly from scratch. 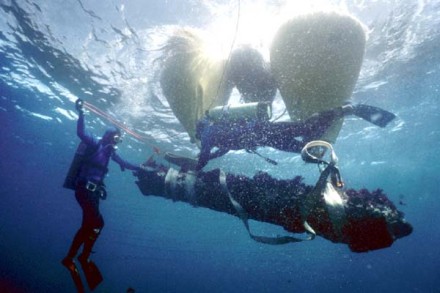 Raising one of the cannons from the wreck of Avondster.