The return fleet of 1661 departed Batavia on December 23 with the destination of Holland. The fleet consisted of seven ships. The Wapen van Holland, the Prins Willem, the Vogel Phoenix, the Arnhem, the Maarsseveen, the Prinses Royaal and the Gekroonde Leeuw.

The fleet was hit by a severe storm on 11 February 1662, on the high seas in the Indian Ocean. The sources mention that until that day they sailed together. Four of the seven ships, the Wapen van Holland, the Gekroonde Leeuw, the Prins Willem and the Arnhem were lost. The rudder of the Arnhem became unserviceable. Despite this, the rudderless ship remained afloat for about two days. This is the statement of the surviving ziekentrooster Symen van Kerckhoven:

The masts had to be cut down and eventually, they had to abandon the sinking ship. Of the approximately 160 men on board, over a hundred made it in the boat. And another ten to twelve men with the bookkeeper in the barge.

It is clear from the various sources that the sinking may have taken place approximately at the longitude of the fictitious island of 'Brandao', but at a much more southerly position of about 26 degrees south latitude. This is the last position known of all four ships.

Because the longitude was difficult to determine in the 17th century and its entry took place in a different coordinate system than is used today, it is difficult to pinpoint the longitude at which the Arnhem was sent and the other ships were last seen.

From the journal of the Phoenix, which did make it to Holland, it is clear that the disaster site must lie more than 40 degrees west of the Sunda Strait. In our present coordinate system 26 deg Z Br, about 65 deg O L.

The survivors, about 80 people aboard managed to save themselves and reached Mauritius. Only months later (May 21) an English ship arrived and took 20 men on board. In October, the remaining 35 survivors were able to travel with the passing Amsterdam privateer De Zwarte Arend towards the Netherlands. One of them was Andries Stockram, who recorded his experiences in "Korte beschryvinge van de ongeluckige reyse van het schip Aernhem".

The Arnhem was built in Amsterdam in 1654. 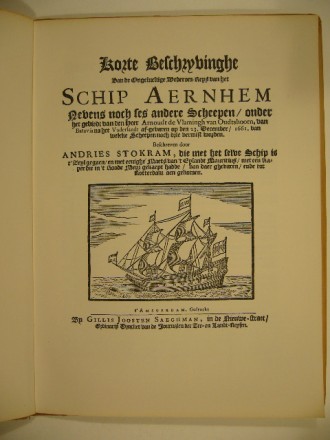 Cover of the book written about the unfortunate loss of the 'Aernhem'.