The Antikythera wreck was discovered in 1900 by sponge divers off point Glyphadia Antikythera. The Roman wreck produced statues dating back to the 4th century BC, as well as the world's oldest known analogue computer, the Antikythera mechanism. 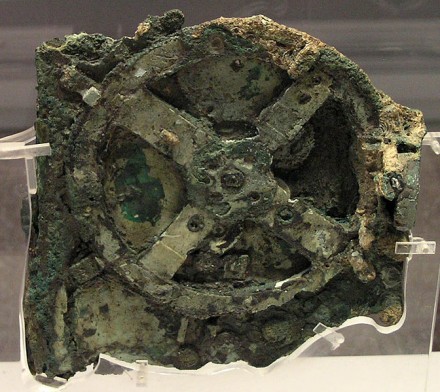 The most famous statue is the Antikythera Ephebe. Two other Epheboi were retrieved, one Kore, a philosopher's head, two statues of Herakles, four Apollos, one Odysseus, one Achilleus and one Philoktetes. The remains of four horses, one quadriga and many more fragments were also found. The rich cargo suggests that, like the Mahdia wreck off the shore of Tunisia, the Antikythera wreck was used by the Romans to ship spoils of war from Greece to Italy.

The date of the sinking suggests a war around 80 BC. Maybe the 1st or 2nd Mithridatic war. Pontus was sacked and numerous statues and other spoils were shipped to Italy after the conquest by Licinius Lucullus.

Mithridates VI was king of Pontus and expanded his kingdom from 88 BC into the Roman sphere of influence. He conquered Asia Minor and even a part of Greece with Athens (88-85 BC 1st Mithridatic war). He was very successful because the Roman occupation was considered very harsh. The first Mithridatic war ended with a Roman victory in 85 BC.

The Ephebe of Antikythera

The Ephebe, dated by its style to about 340 BC, is one of the most brilliant products of Peloponnesan bronze sculpture; the individuality and character it displays have encouraged speculation on its possible sculptor: perhaps it is the work of the famous sculptor Euphranor in the Polycleitan tradition, who made a sculpture of Paris according to Pliny the Elder. It was the first of the series of Greek bronze sculptures that the Aegean and the Mediterranean yielded in the 20th century which fundamentally altered the modern view of Ancient Greek sculpture. 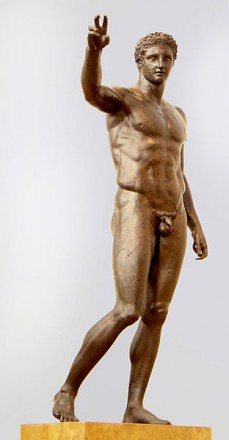 The Ephebe of Antikythera.

The Antikythera wreck was a Roman cargo vessel, probably a corbita of ca. 300 tons. The ship yielded remains of the hull planks. The hull was made using mortise and tenon joints and the planks were pinned with copper nails. This proved that the ship had been built by the Romans.

At least one plank of the ship was dated to 220 BC +/- 43. Whether the ship itself was also built in this period or the sample comes from a reused plank is unclear.