The ship caught fire during the winter of 1708/09 and sank in the harbour of Dalero. The stern is almost completely destroyed. The bow and front parts have been partly preserved. The destiny of the Anna Maria was Lisbon, Portugal. but was caught in ice and had to wait in Dalero harbour for better weather.

Model made by Harry Alopaeus.

By diving it could be observed that the upper layer of cargo consisted of timber of Swedisch pine. In the hold,planks, copper and barrels have been found.The iron bars are missing. Large parts of the bottom are covered by an unidentified concretion, which may be remains of oxidised iron.

The ship hull was of oak and could not be analyzed. Parts of the timber cargo could be analyzed. Dendrochronologist dated it around 1700.

A ship called the Anna Maria appeared in the Stockholm archives concerning a lawsuit in 1709. A fire broke out on board a merchant ship Swedish flute-ship Anna Maria of Stockholm while the crew was of the ship.

Most of the crew members had been sent home. A few men remained on board the Anna Maria to keep watch. The winter of 1708-09 was extremely cold, and the watch crew most probably suffered from the conditions; a fire was kept burning in the galley. One day crew members from a neighboring ship were offered a meal on the Anna Maria. Afterwards, the visitors and some of the Anna Maria's watch crew went ashore to drink ale, as the ale on board was frozen.

In 1698 the Anna Maria was expected back from the salt port of Torre de la Matta in Eastern Spain but she was delayed because of an incident with a Turkish pirate vessel, as described in correspondence between the Swedish Embassy in Lisbon and the authorities responsible for foreign affairs in Stockholm. The Anna Maria, and another Swedish merchant vessel the Stora Christoffer of Karlskrona, had been attacked by North African pirates. The Embassy reported that she "defended herself bravely against two large Turks who dishonourably turned tail". As a result of this incident, Jürgen Corneliussen, the Captain of the Anna Maria, was wounded so gravely that he died in Cadiz (Ahlström 1988; SRA, Diplomatica, Portugallica vol. 14, report by Nicolas Simons to Stockholm, 16 December 1697)

Archive studies revealed that the ship was build in Amsterdam in 1693 for a consortium of 15 Swedish shipowners. Originally she was called "Juffrouw Anna Maria". The ship sank in the harbour of Dalaro in the winter of 1708/09. 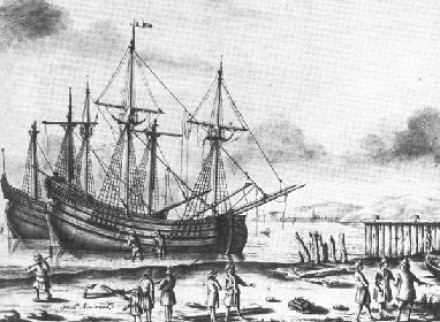 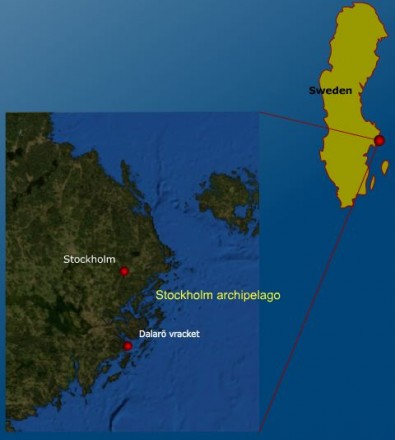