The career of a pirate hunter

In 1763 the Admiralty of Amsterdam began construction of the frigate Alphen, destined for duty in the Mediterranean. The ship was completed in 1764 and was launched a year later, under the command of Captain Evert Frans van Reetraet. Manned by a crew of 230 and armed with 26 iron twelve-pounder cannons, two bronze six-pounder cannons on the forecastle, and eight smaller cannons on the quarter-deck, Alphen successfully combated piracy along the Barbary Coast for ten years. In 1775, Alphen sailed home and retired from service.

However, two years after its retirement, the Alphen was hastily returned to service. This time the ship was sent to the West Indies to assist Dutch merchantmen beset by English pirates and privateers. Under the command of Naval Captain George Willem Hendrik, Baron van der Feltz, Alphen left the Texel roadstead on 29 April 1778, and sailed on its own to St. Eustatius. There, the ship joined a small squadron led by Rear Admiral Count Lodewijk van Byland and received orders to patrol the coast of Suriname, where English privateers were reported in great numbers.

Construction plan of a frigate, most probably that of the Alphen, drawn in 1762 by Willem Lodewijk van Genth of the Admiralty shipyard in Amsterdam (source: Maritime Museum Amsterdam. Tekeningen Archief No: II B - 13, Wo 34).

On 15 September 1778, Alphen was anchored in the harbour of Curaçao, in the usual anchorage for warships between two tiny islands called Kleine Klip and Grote Klip (respectively, the present-day Small and Large Wharf). Lying near it in the tropical water were the English privateer General Morrisand, the Dutch flagship Princesse Royaal Frederica Sophia Wilhelmina of Van Byland, and several smaller merchant vessels and local watercraft. Just before eight o’clock, the quiet harbour was shaken up by a series of loud bangs. Several sailors of the Princesse Royaal thought the terrifying sound came from their ship and jumped overboard in panic. Others could see that it was not their own vessel, but the Alphen that exploded, sending a rain of wood iron and human body parts across the area.

The loss of life was tremendous: 204 of a crew of 227 men died, including the ship’s captain, Baron van der Feltz, as well as 50 workers from shore. The cause of the disaster remains a mystery to this day, although recent archival research suggests that a suicide attack by the ship’s second gunner Gustaaf Hendrik Aren, during which he set the powder room on fire, may be the most credible explanation. 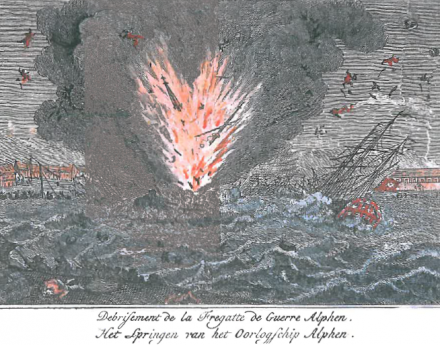 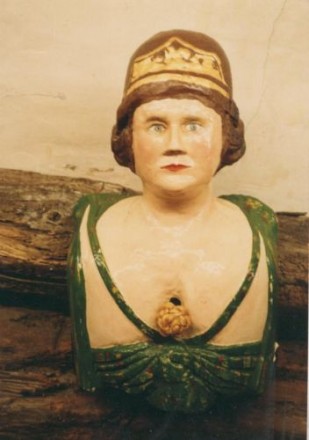 The ‘Loden Verrader’ figurehead in the Curaçao Maritime Museum is regularly 'reclaimed' and returned again by sailors of the Dutch Royal Navy according to a 150-year-old tradition. The object was long rumoured to have come off the Alphen, however, a 2009 study by Wil Nagelkerken (STIMANA) revealed that the ship had a figurehead in the shape of a lion. 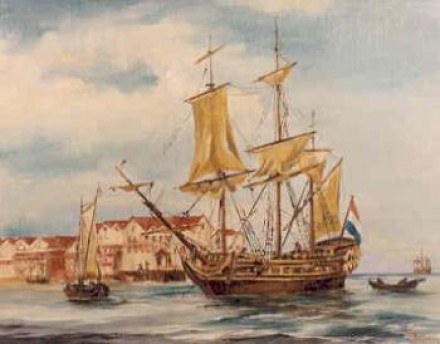 Painting of the Alphen by J.P.M. Wanders.

In 1987 the Institute of Archaeology and Anthropology of the Netherlands Antilles (AAINA) began an archaeological survey to locate the remains of the Alphen in St. Anna Bay. Parts of the wreck were soon found. At a depth of 20 metres and spread out over an area with a length of ca. 130 metres, numerous iron cannons were located along with wood from the ship’s timbers, and glass, ceramics and other kinds of artefacts. The wreck itself was found to be in bad condition. The front part of the ship had already been blown away by the explosion, and shipworm had turned the ship timbers into a dark layer of organic pulp. 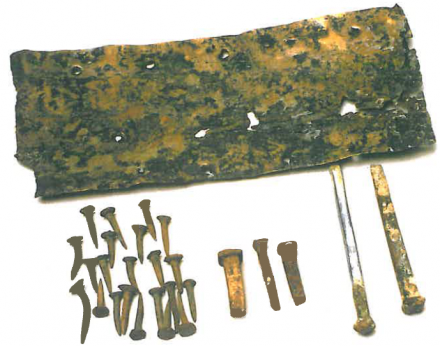 Copper plates such as these off the Alphen were used to protect the hull of ships sailing in tropical waters against the Teredo Navalis (shipworm) (photo: Wil Nagelkerken).

Excavations were conducted by AAINA over the course of several years and, beginning in 2000, were continued by the Foundation for Marine Archaeology of the Netherlands Antilles (STIMANA). The work has resulted in recovery and in a later stage the conservation and analysis of more than 10,000 artefacts. Part of the assemblage is now on permanent display in the Maritime Museum of Curaçao and serves as a testimony to the 1778 disaster. The Alphen wreck site is open to divers but only under restrictions and with a guided tour. 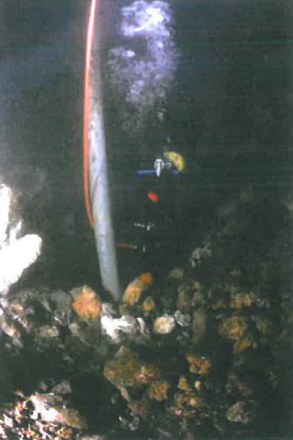 Excavation of the Alphen using an airlift (photo: Dennis Knepper). 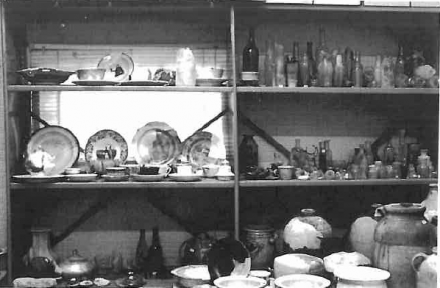 The collection of artefacts found at the wreck site not only contains objects from the Alphen but items of an earlier and later date as well (photo: Wil Nagelkerken). 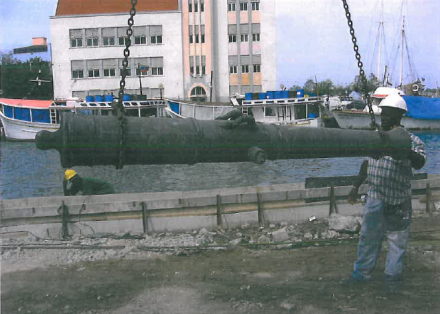 A bronze 6-pounder off the Alphen was found during road works at the Kleine Werf. An inscription on the cannon reads: "Me Fecit Pieter Seest Amstelodami Ao 1776" ("Pieter Seest made me in Amsterdam, 1776") (photo: François van der Hoeven).