The Aardenburg was a fluteship purchased in April 1675 for 23000 guilders. The ship was originally called Fontein and was renamed Aardenburg (After the town in Zeeuws Vlaanderen).

Flute
The Aardenburg was not a good sailor but nevertheless served in Asia for almost 10 years. Of which the last 7 years under skipper Jan van Haren. The Aardenburg was deployed on the route along the east coast of India [to Bengal]. This was a relatively safe route where ships with a large loading capacity and relatively shallow draft were deployed. A flute was ideal for this.

Wood
In 1685 the ship was so worn that it could only be used on short routes in the Indian archipelago. The Aardenburg was sent to Ambon because no better ships were available. Governor Padbrugge had the flute repaired. He then sends the Aardenburg out to fetch a load of wood in Celebes. A cargo of wood is not easily damaged even in a leaking ship. Every now and then it is mentioned that a ship, afloat on its timber cargo completed a journey.

Evidence suggest that the crew tried their best to keep the vessel afloat, but eventually left the ship when the galley had flooded. They made their way to Wowoni with the boats and from there sent to Buton for help. Everyone aboard was saved. 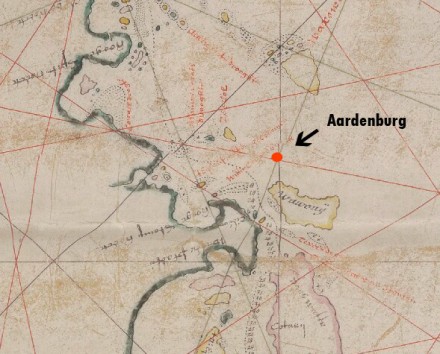 Detail of Map: part of the Indian Archipelago from Sapi Strait Eastwards to Timor Laut. Celebes to Halmahera and Islands lying between them. 1669. Edited by MaSS. With indicated the location of the Aardenburg approx.

Last voyage
The Aardenburg arrived in Celebes. Master van Haren, however, predicted that he would not be able to make the journey back to Ambon. Due to the winds of the mousson. He almost succeeded in his return journey from Celebes to Ambon and came close to the island of Buru. From there, however, he was forced back in the direction of the Celebes coast. The small island of Warwij, which lies off that coast, was sighted, which, given its position, is present-day Pulau Manui. While sinking they sailed towards the more southerly situated Wawonij (nowadays Wowoni). The Aardenburg sank 2 Dutch nautical miles* from Wowoni.

saved
The people on board - about 71 men - with a number of soldiers who were relieved among them survived the accident. The cargo of wood was not rescued.