The wreck was discovered in the Selångersån at a shallow depth of between 0.3 to 2 metres. This site once formed a natural harbour in the 17th century, but has been subject to the post-glacial land-rise, which explains the shallowness of the site today.

The wreck was first surveyed in 2000 under the lead of M. Holmqvist of the Länsmuseet Västernorrland and monitored by local divers, who reported the ongoing destruction of the wreck as a consequence of currents and ice floes.

In October 2006, divers of the Swedish Maritime Museums carried out a survey under the lead of Niklas Eriksson.

The bottom portion of the wreck has survived intact with the keel, floor-timbers, stringers present, preserved up to the fifth strake. The planks are fastened in the clinker-technique. Several top-timbers from the site, however, indicate that the characteristic joggled recesses indicative for lapstrake/clinker-fastened planks are absent in the upper part of the hull, evidently completed by flush-laid (carvel) planks above the waterline. Thus, the vessel would have appeared like a carvel-vessel when it was afloat.

Such a type has been addressed as Halvkravell ("half-carvel") by the Swedish ethnographer Olof Hasslöf, who interviewed a boatbuilder who built a similar vessel in the 1930's (cf. photo below). 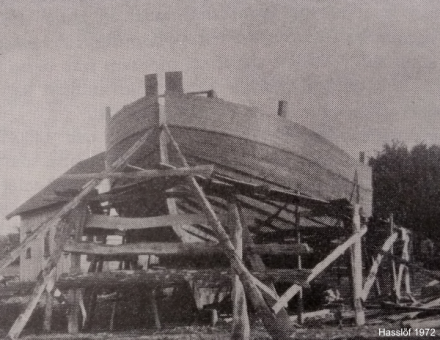 The term "half-carvel" is slightly misleading though, as the vessel is essentially a shell-first, clinker-built construction and only a carvel by analogy.

The "half-carvel" phenomenon is mostly associated with northern Sweden between the 16th-20th century, but comparable finds are also known from Norway, Denmark, Germany and the Netherlands.

The site is subject to further deterioration caused by currents and ice floes, as well as the post-glacial landrise, through which the upper portion of the wreck could become visible above the water-line in a matter of several years.